This show was the most overhyped title of the first half of 2012 and the fandom was going crazy about it months before it began to air. The reasons were rather easy to pinpoint.
1) It had the director of Cowboy Bebop, Watanabe Shinichiro. And because Cowboy Bebop is awesome, this show must be awesome too.
2) The show would also be about a Jazz band. Jazz is considered to be the classiest type of music ever made.
3) The main genre may be the simplistic slice of life, but since Nodame Cantabile was a great slice of life around music, this one must be awesome too.
4) The setting of the series takes places in the 60’s. It is an era no other known modern anime dealt with, and thus it will be very original and interesting.
5) It would be part of the NoitaminA timeslot, which for most translates to amazing production values and quality storytelling.
6) 2012 is a shitty year for anime and the fandom is grabbing at straws.

So sure, one could easily expect it to be the anime of the year with all those reasons above. I on the other hand didn’t have high expectations for some very simple counter-reasons.
1) Cowboy Bebop was an awesome space western full of action, suspense, interesting sci-fi stories, and tributes to various retro movies. Unless this anime would head for that direction, there is no way to expect the director to pull out something equally entertaining. And all the info pointed out this would be a very down to earth show; so why would I expect it to be awesome?
2) I don’t like Jazz; I am a fan of rock and metal. And it’s not about the size but the way you use it.
3) Nodame Cantabile was great because it was set in university and dealt with the adult lives of grown up people. This anime would deal with the naive lives of immature high school kids; something commonplace to hundreds of shows and thus hardly mature or special.
4) So what if it takes place in the 60’s? What special did that era have next to the 80’s or even today? They didn’t have internet, or cell phones, or colour television, and that is pretty much all of it. People didn’t live or behaved that differently than they do today, aside from using a slightly different vocabulary and women being nothing but housewives. Ok, there were also hippies back in the 60’s. Lots of stoned flower people dancing and preaching about the happiness of life. Too bad this show is not about them; it would be awesome if it were.
5) NoitanimA stopped being a guaranteed source of quality anime years ago. It has produced some of the most terribly executed shows of all times; although this is restricted to those including sci-fi and not slice of life. So it might not have been much of a minus in this show, yet I stopped believing in them offering something great all the time.
6) Ok, we were desperate for good shows but I would never place my hopes on a slice of life anime. I find them boring.

So after the show finally aired, what were most of the viewers saying? Nice production values, nice atmosphere, nice high school feeling. But nothing more. As I foresaw it was just your average romantic school comedy with the usual stereotypes, and predictably simple lives of normal kids living the peak of their youth. Motivational and inspirational? Yes. Special in any way? No. And the biggest disappointment was the Jazz part everybody was so thrilled about. There is barely much music in this; it is used only as a subtle excuse for the main heroes to form a band and interact with each other for a common goal. And sure, there is romance too but damn is it simple and linear. It is not even a love polygon since all you get is A loves B who loves C who loves D who loves E. That’s it; nothing to spice things up like two guys after the same girl. Or a threesome. Or gays, traps, cat girls, stoned hippies, WHATEVER. And their personalities are your standard fare of simplistic caricatures. I can hardly say anything to describe them other than the insecure boy, the cheery girl, the motivational sailor, and so on.

In all, it makes a fine time killer if you are into school romance with some Jazz for BGM but it is hardly something we haven’t seen before or worth to talk about in a few years from now. 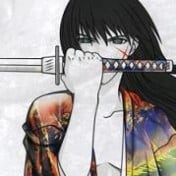 Yeah I think Kara no Kyoukai sets a bar that would break the budget for most fast-production anime series, but agreed.

Spot on. The only thing I would change is the score for animation: i think it's more like 7, not 10, since it is good but nothing outstanding or special. In my opinion, the "10/10 animation" sounds more like Kara no Kyoukai or Mononoke.

But yeah, it's a matter of tastes, and they are different =)