Animated by Studio Madhouse, the king of anime series; so you automatically expect it to look nice. Directed by Tanaka Hiroyuki, whose only other work is the super action/gore Hellsing Ultimate. Plus the setting and the story make Claymore to sound a lot like Berserk, one of the most awesome shows of the 90’s. Thus the expectations were really high in this one and to the most part most viewers had very positive opinion about it. But since I am not most viewers and I am making an analysis and not stating an opinion, I say it could have been ten times better.

Claymore really is like Berserk, but with more boobs and less context. It hardly does anything with its potential. It is not also a good action show; just a gorefest with mostly lazy fighting scenes; so don’t go expecting something akin to Hellsing Ultimate. It is also not one of the better jobs Madhouse has done, since it lacks finer things such as fluent fighting scenes or creepy monster voices. It is also quite disappointing even if you just expect to see a faithful adaptation of the manga, since it covers only a small part of it and changes the end it in a way that makes a continuation imposible. So, no, it is not masterpiece level but at least it has its charm half the time.

Claymore’s strong point is not its story, which to be frank is simple, linear, deviates from the manga it is based on in a bad way, and ends in a rather open way. The basic premise is about fighting fire with fire and thus the monsters that plague humanity in this series are to be dealt by humans possessing monster abilities. It sounds interesting to build something around it but that only happens in terms of characterization amongst the cast and not in terms of world-building. So yeah, we have monsters and monster hunters and a Medieval-like world. If you expect anything more to it, you won’t get much. There will be very little info about why the world is as such. Where did the Yoma come from, where are the rest of the Claymores mentioned, what about the other organizations that are mentioned? The pacing of the story can easily be divided into short arcs with each one having its own set of monsters and settings. Each one adds something to the whole, but as I said, it only does it in terms of characterization and not world-building.

Characters on the other hand are the meat of the series, as most of the selling point is their psychoanalysis and interaction with one another. Claire, the main heroine, begins as a heatless killing machine and along the way we get to see a lot about her which make her far more than a robot without will, following orders and going around killing things just because she was ordered to do it. The same can be said about most other main characters, the rest of the Claymores and that annoying sidekick Raki.

A thing to notice is that this series reverses gender roles. The Claymores are all women yet behave as brute males, while Raki is a guy and is a spineless idiot who is better fit as a daddy’s girl. Feels weird but it is not negative.
What does feel negative is the adversaries, the Yoma, who to the most part are just mooks that exist to be killed or generic bosses. And as I said we get very little about where do they come from. Not only that, but they don’t really feel like monsters most of the time. Rather they are shape shifting cannibals with too human behavior for the gruesome creatures they are supposed to be. Makes them look stupid.

But who cares about them, the story is about the Claymores, whose worst enemy ends up being their own selves, as they slowly all turn to Yoma themselves. Yes, nice idea to build something around it but since the story ends openly, it kinda ruins it. Plus Raki is an extremely annoying character, unable to be sympathetic to anyone. He is supposed to be the guy who reminds Claire that she is still human and make her have cozy feelings and such but ends up being a burden. The only thing he does is nagging, making unrealistic remarks, standing in the way, and generally causing more trouble than help. Supposed, that is what it means to be human but come on; monsters are eating people alive everyday and he wanted everybody to be a big happy family. This stops being humane and ends up being utter bullshit. If humans are so naive, then hail to the cunning cannibalistic Yoma.

As interesting as the main cast may be though, it is left without complete catharsis, since the ending is open. They tried to wrap things up by not letting a major villain escape but it will still feel like they left a ton of things not looked into.

The art is very good as far as shapes and backgrounds go. High on detail with lots of filters and dark palette colors to transmit the feeling of a grim world overrun with dread and death. The aesthetics are great to transmit the proper feeling of the show but this is pretty much where the charm ends. I found the character figures rather unappealing, as the way the faces were drawn felt weird. Plus, all Claymores look too much alike because of their identical uniforms, weapons, hair color and eye color. So I hardly found them to be mesmerizing, or sexy, or that important to care about. Also the common Yoma are drawn too simplistic and human-like and it’s easy to see them just like brawn-skinned bandits with fangs, which hardly makes them scary. The action scenes are not that great. Although there is a lot of gore going around, most of it is limbs flying and fountains of blood gushing all over the place. Internal organ anatomy is way off and far from the cool splatter OVAs we used to have back in the 80’s. Most battles don’t last much either to get your blood boiling; it is mostly a tormenting build-up full of suspense that ends in a rushed and dull way. Also, there practically is very little actual animation to the fights as most slashes are nothing but frozen pictures with a silver line that is substituting fast slashes. It is usually followed by over the top amounts of blood, which as cool as they may be are still far from the retro goodies and their horrific entrails splattering all over the screen.

Music themes are very good and fit with the mood of the series. The dialogues are also ok as long as they are about mission information and character immersion. All the rest are a mess. Just like in any retarded shounen, the characters will be talking for 10 minutes during battles, revealing all sorts of information their opponent would have no reason to know, especially when all they plan to do is just kill him. The Yoma again talk like simple bandits, the illiterate kind, and hardly have any filter to make them sound like the monsters they are supposed to be. Also, Raki’s moral speeches are unbearable, as he keeps saying the most out of place things all the time. He is not the voice of reason or the good angel sitting on the right side of the brutal Claymores. He is a retard with zero understanding of reality and that makes him sound unbearable and a major mood-killer.

I don’t find much replay value in this series, since the story is too linear, simple, ends openly, and has Raki in it. My enjoyment is also low, as the negatives outnumber the positives. If this series had more animation, less retarded dialogues, a more complete world-building, and Raki would be dead from the first episode, then I would have given it a 10. I am aware that it is still a very famous show, and that lots of people still like it a lot. But it is only because some or all of the following reasons apply to them.
- They haven’t watched Berserk
- They haven’t watched the lolvely 80’s gorefests.
- They refuse to watch the two above because HURRR DURRR the visuals are dated so the shows can’t be good.
- They found Elfen Lied to be mature and thought-provocing because it had killer lolis.
- <s> They are tasteless retards </s> … errr, good dark fantasy anime are extremely rare to get. 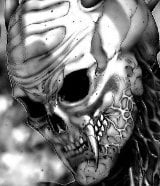 This is one review of yours that I certainly think is a bit too harsh.  Your final thoughts list is especially a bit on the bogus side.  I by no means think that Claymore is some work of genius, but I also found it to be entertaining as far as shounen goes.  It did not heed to traditional ecchi trends and had a nice dark fantasy atmosphere.  There simply aren't that many animes that capture the atmosphere other than Berserk whether or not you care for that particular atmosphere.One of the reasons I like Claymore as much as I do is because I am a fan of Berserk; Claymore gives a taste of something a little similar but not nearly as good.  I don't completely disagree with everything you state in this review though.  I certainly did not enjoy Claymore for any intellectual based reasons, the animation is sometimes mediocre, Raki is lame, dialogue is shakey, and the ending is an absolute abomination.  It's really not an anime worth hating as there are plenty of other animes out there that make Claymore look like some kind of masterpiece.

Hey. I have seen Berserk, I love it and I see Claymore as something that comes closest to it. Can you recommend me an Anime series, other than Berserk that is like Claymore? Feel free to recommend Manga as well. I want something dark and epic, with a bit of romance too. Oh and no ecchi crap.