I'm a regular 29-year-old with regular hobbies. Some include watching crime mysteries, creating characters for my never-to-be-published books, animals, and, of course, manga and anime.

Now that the dry and slightly awkward introduction is over, onto the good stuff!

Anime has been part of my life since Pokemon, but I only learned about it during the Dragonball Z/Yu-Gi-Oh!/Naruto time period. Ah~ The days of Saturday morning cartoons. Once I began watching Toonami, I couldn't stop! The very first episode in Japanese? Naruto, episode 101. So funny I watched it twice...in each language. Nowadays I tend to watch everything subbed, but there are some series that I can't help but bend the rule for.

I have a whimsical nature habit of getting distracted and can be a bit random and forgetful. It drives friends crazy, but somehow they love me anyway. :3 As per my personality, I change my profile avatar and banner quite often. Usually matching them with a series I'm currently watching. This time 'round, the two are from Natsume Yuujinchou.

I love leaving comments on character pages, so if you happen to see one, drop a hello~

So far I enjoy the split between comedy and seriousness(if thats a word) and uhm.. So Idk if you've seen my profile... but i don't really read manga. So no.. that's a no to that question. I only watch it because a friend recomended it. 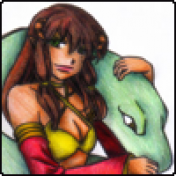 I read your comment about Kouha Ren and-I'm not sure how much you read up on the Magi manga and omakes. If you intend to read all of that later, better not continue reading this comment because there will be spoilers.

It's stated that in his early childhood Kouha and his literally mentally ill mother were cast off to a secluded part of the palace. Though he thought they were "discarded like trash" because of his mother's mental condition and own weakness as he's a child, Kouha loved her dearly and was overprotective of her. He developed his own mental issues as he acted as her proxy and in his overprotectiveness and hatred towards his father (for treating them like this) he started attacking everyone who came close.

That included also his older brothers Kouen and Koumei when he met them the first time at age 6. At that point he already appears emotionally instable, is easily irritated and even cries when he's praised. Praised for what? After attacking Kouen with a knife, he's told that his skills with the knife are good, he actually is not trash, that he too can prove his worth to the empire when he fights on the battlefield for them.

His basic character is already built at that point and he can't help enjoying to hurt people, for one from his infantile development and for the other because of a twisted logic that hurting others proves his strength and thusly worth. However, from that age on he is taken to the main palace and more influenced by Kou's ideals. And seriously, those people have an incredible national pride and put the Empire often above their own lives, even state that there's no greater honor than fighting for them even as undeads until their body can't be put together anymore.

Not only that influenced him, but also the relationship with his brothers. Kouen is actually a huge nerd about family and Kouha says so himself, his brothers' trust built him new up and gave him a meaning to live (he's referring to their first meeting when he was 6), and he now trusts his followers in the same way. His followers are typically those people that are gossiped about at the court ... People that were just like Kouha when he was a child. He relates to them and he knows they too can be for use to the empire.

When watching his expressions through the manga, reading his speeches and seeing whom he enjoys to slice up and to threaten, we can understand that Kouha, yes, likes killing, but it's those people that a) don't belong to Kou and b) appear worthless to him. Kouha probably doesn't see a value in the lives of humans itself and thusly, when he feels like it and there's nothing holding him back (aka nothing harming the Empire, his brothers or him with it), he just, like, does it?

But his brothers? He worships them! His sisters? Adoration! His followers? His friends and dear people! Literally everyone in Kou? Precious and needed!

I love your banner thingo!!!! :o So much cuteness!!

Also I saw your comment on Erin's mothers character profile type thing and it kinda made me laugh.... but also made me cry because it makes me sad what happened to her TT^TT

Hi there thanks for the comment .. m doing great .. how about you .. glad I can meet some AOT fan out here ^^