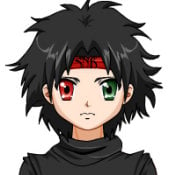 Im just an average person who has a MAJOR obsession with anime and Manga. Since I was a child I had always been a fan of the Dragonball series, which was the spark of my obsession with both anime and manga. From Dragonball I went onto other fighting anime and eventually came to like  and watch all kinds of Anime, I tend to be drawn more to the romantic/comedy anime genre because they seem more realistic and have lots of funny moments.

When I was little, I used to doodle on my desk in elementary school, trying to draw the characters from Dragonball Z. To learn to draw the characters more better I read manga and tried to copy the images. This then led onto my obsession with Manga. I currently own more than 100 manga of all kinds. I have since stopped collecting them and now I read my manga online at  Mangareader.net

My favorite Anime shows currently are:

* Links take you to animefreak.tv

My Favorite Manga currently are:

* Links take you to mangareader.net

looks like no one welcomed you six years ago so time to do so, Welcome to AP have fun and enjoy your stay.