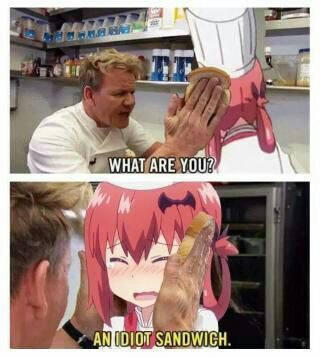 hey u wanna be friends

Is that a Tatami reference?

That is a Tatami Reference.

hey u wanna be friends?

And sadly,i didn't get Jeanne.

Lalter,Anne/Mary and Astolfo spooked me instead.

Yeah,I heard of him.I'm training my servants in America right now.Perhaps I will grail some of them after I finished Babylonia.

Update:I got my account back,yay.I'm ready to get Jeanne with my 145+ SQ and 1 ticket.Hopefully best waifu can come home as my tank.

That's why I'm skipping Artoria rate up today.I need to get her child first.

Honestly,as much as I'm okay with FGO earning money,they need to balance out the abyssmal rates with free SSR.If there's SR of choice,then they also should do the same as SSRs.From my experience with plenty gacha games,FGO is definitely the stingiest.At least Brave Frontier,GBF,Opera Omnia,Love Live and Fire Emblem Heroes shower us with many free stuff.It had got to the point where even the Japanese fans went to DW to suggest the seperation of CEs and Servants.

I have seen a clip of that from a chinese FGO video.It was hilarious.Nonetheless,the two can hopefully warm up and get along like Gilgamesh and Ozymandias.

Berserkers are the strongest when it comes to raw power,but they themselves are weak to others attacks.What the hell are Alter Egos by the way?Extra classes(not Avengers and Rulers) make zero sense to me.Might as well put BB into caster class.

London and Orleans constitutes some of my favorite characters.Jeanne and Marie from Orleans and Mordred,Jekyll/Hyde,Tamamo and Lalter(Technically Artoria)from London.IMO,the cast from the two singularities are the most enjoyable.My least favorite would be Septem,as it is pure dumpster fire.Nero is a poorly-written character with some sueish traits,and everyone were shilled OOC just to praise her,when she literally done nothing.Red Saber's writing in Extella does not fare better either.

According to my veteran friends,they had a harder time against the bosses of America and Camelot than Tiamat,especially when the Camelot boss's np ignores evade and invinicbility.

Forneus and Barbatos.I barely killed the latter with my surviving Emiya.My support for both demon pillars were Merlins.My tactic is to make use of the AoE attacks to fill up my servants NPs.

Who are you least favorite servants by the way?