For a sci-fi packed with more potential than Barry Bonds with steroids, Starship Operators was painful to watch unfold.  At just about every possible turn the series managed to fail in one way or another, turning what could have been an outstanding series into unmemorable, bland one.  The premise itself, for being rather cliché, actually didn't initially seem that bad - a group of military cadets are taking one of their nation's newest warships, the Amaterasu, on its maiden voyage prior to their graduation ceremony.  However, during the flight their nation receives a declaration of war by the much larger Kingdom, prompting the cadets to take the ship and run rather than cede the technology to their captors when their nation surrenders without a fight.

Unlike most series of this fashion, the crew is not a bunch of immature kids - all are trained to handle a starship, they just don't have much hands-on experience under their belt.  Sadly, this premise gets annoyingly shaky when they choose to finance the ship's operation by turning it into some off-the-wall reality TV show, which only becomes more prominent as the series drags on.  Try as I might, I simply couldn't stomach how horrible this was, as far too much time is spent tracking the reporter's antics rather than developing the characters.  Ultimately the series falls into a "character group of the day" mentality, picking a handful of characters and inserting them into dramatic situations only to never touch them again.  Some of these episodes involve death, some romance, but it's hard to really feel any emotional attachment to any of parties involved, and this really hurts its overarching enjoyability.  The romances, for instance, are built up very loosely (generally only hinted at) in the earlier episodes, and when finally addressed their resolution tends to be somewhat sudden - after being "resolved," the romance basically disappears from focus in the series altogether.  Though I really wanted to attach myself more to the crew, aside from Shinon not a single character managed to captivate me, and most ended up feeling more puppets of the drama rather than human beings.

Also, the ending sequence is rather haphazardly rushed and makes little overall sense.  While I understood that the crew of the Amaterasu was supposed to be enormously talented and the ship itself a very powerful asset to their survival, it boggles my mind how they oust the Kingdom's top generals multiple times - the Kingdom is supposed to be some militaristic galactic empire, not some oddball compilation of brainless thugs piloting warships.  This lack of believable villains ends up derailing the soundness of the ending - it's decent at best, as the events leading up to it border on absurd.  Still, it did manage to still be fairly dramatic despite this, and Starship Operators does have its moments throughout, so I can't say it was so much terrible as simply disappointing.

While overall Starship Operators flaunted a smooth, crisp display of CGI, I can't say I was very impressed.  The ships scattered throughout the series could have used a substantial amount of polishing, as they appeared rigid and block-like rather than fluid and aerodynamic; a bad aesthetic flaw for space age vessels to possess.  Ordinarily I wouldn't consider this a particularly notable flaw, but the sheer number of long-distance, deep-space camera shots allotted for far too many empty and uneventful screens even in the heat of battle.  More often than not I found myself completely uninterested in what was visually happening, and were it not for the subtitles, I could easily have seen myself falling asleep on a number of occasions.

Fortunately, though, the animation wasn't half bad when it comprised more than a black screen and a handful of rigid polygons.  There was a lot of emphasis put into things such as consoles on the bridge, significantly enhancing the futuristic feel of the interior.  Also, there were a lot of subtle details that highlighted the ship as being plausibly futuristic, which helped offset some of the other unrealistic annoyances that plagued the storyline - for sci-fi nuts like myself there are certainly plenty of entertaining quirks to look for and gawk at, and for that it deserves at least some credit.

If it does but one thing successfully, Starship Operators manages to put forth a solid musical performance.  Much of the insert music is quite ambient and appropriately placed, certainly helping it keep on track with the overall (at least attempted) serious atmosphere pervasive throughout.  Likewise, the voice acting tends to be above average as well, especially with the more central characters like Shinon.  Where the series failed in developing its characters the actors picked up the slack, and fortunately this does make the show watchable when it otherwise would have been overwhelmingly droll.

While I really wanted to like the characters more than I did, Starship Operators set itself up for failure with its time constraint of a mere thirteen episodes.  It tries to explore the stories of about twenty to thirty members of Amaterasu's crew, but ultimately is forced to condense and package them into groups rather than individuals.  The result is a viewer who identifies the characters by face instead of name, resulting in a rather shallow emotional response during important dramatic moments such as a character's death.  Too many times I found myself wondering more how a death would impact the story than it would the characters themselves, as more often than not I couldn't recall who exactly on the crew it personally impacted the most.

Probably the best part of Starship Operators, though, is that the characters are, in general, very likeable in spite of their lack of development.  Shinon, for instance, is quite the rare female lead - she's confident, bold, and brilliant, yet simultaneously torn (in a very realistic fashion) by her own insecurities.  Right off the bat I felt an attachment to her, as she's one of the few characters thoroughly developed from start to finish.  Unlike most of the drama, that which involved her actually proved emotionally captivating, and there was actually a scene toward the latter half of the series that caused me to tear up a bit - a damned hard thing for an anime to do if I do say so myself.  In many ways the ability of Starship Operators' story to not inwardly collapse was bent on the strength of her character, as the maturity she contributed to the series' atmosphere was really all that kept it afloat.

Yet, sadly, all the characters in the series might have been equally as fascinating had they been given the time to develop; a trimming of the cast and a stronger emphasis on making it a character-driven anime instead of a story-driven one would likely have resulted a much stronger presentation.  The fact that it portrays life on a starship from the perspective of characters other than just those on the bridge makes it unique, and I can't help but shake my head in shame at how much potential was wasted by letting this innovation go completely to waste.  In so many ways the story just isn't important to the overarching events affecting the crew - sure they're being chased and yes they have enemies to shake off, but it just wasn't interesting when the series tried to delve into the politics behind the war.  I cared more about how the crew was dealing with problems like breaches in their hull rather than some fancy parliamentary aristocrat whining about his cravings for power.

Starship Operators would have, could have, and should have been a top contender for best anime of 2005 had it been given a less absurd premise and a more directed focus.  Unfortunately, even for spaceship loving geeks like myself, it just doesn't make the cut in terms of quality.  If nothing else, it proved that turning a tactical cat-and-mouse game of space warfare into an intergalactic game show is a faulty premise, and hopefully such an abhorrent concept will never taint the sci-fi community ever again (anime or not.)  Still, for those who can overlook its flaws it makes for a decent watch, and I can't say it should be passed up simply because its tacky in a number of ways.  With serious, mature space dramas as elusive as Bigfoot himself, you really can't go wrong in at least giving it a shot - chances are if it interests you from the first episode you'll stay interested all the way through.

Just finished watching it for the forth or fifth time and have to say this series keepsfurrowing on me. I think it's because the battles are interesting inan intellectual way (like a subdued/toneddown Code Geas), the political intrigue, how it avoids moe stereotypes, and how well the ending is executed. It has it's flaws, but for me it's still a lot of fun tearth. Anyway, thought I would hop in and say that even after a couple years, it's still a favorite.

One follow-up comment:  If Starship Operators had been done as a character-driven show rather than story driven...that would essentially give you:

which was a far, far superior show...

Mostly agree w/ this review;  I personally enjoyed this series and watched it through to the end, but only because of Shinon.  I realize the main characters are green, inexperienced military academy cadets, and their decision to take a stand for their homeland is a courageous one, but sometimes their startling naivite was just jaw dropping.  There were so many times I found myself yelling back at my television to the characters "...and what the @#$! did you THINK was gonna happen! JEEZE!" and wanting to smack them around a bit.  The characters didn't seem to truly appreciate the gravity of the decision they'd made to stand their ground and fight until they start taking casualties.  I was expecting someone---anyone---to step up, to rally them and remind them "THIS IS WAR!", but no one ever really did.  The main enjoyment I got from the series was watching Shinon's opponents badly underestimate her and watching her come up with the next brilliant move to smash them.

The whole "reality-show" angle was very bizarre...I guess it was an attempt to satirize the media-saturated aspects of contemporary warfare in a SciFi setting, but it didn't really work or make very much sense.  The writing for this show was all-in-all pretty abysmal, but it had enough action and one solid character (Shinon) to make my watching it feel worthwhile...that and the intro music was kind of catchy and toe-tapping.  If more care had been given to the plot, more respect paid to the realities of warfare, etc, this could have been a truly great show and not just a mediocre one. 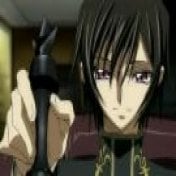 I really enyoed this anime. The closest to this I have seen is Gundam and they actually focus more on the GUNDAM parts of the anime then they do Ship to Ship Combat. Wish I knew of another anime similar to this....Wait, I have seen Irresponsible Captain Tylor, that was good in my opinion.

It could have been a better series, yet I've been itching to watch it again recently, so they did something right. Also noticed they mention some technology at the beginning that explains the real-time communications, so at least they came up with a BS reason for it instead of just ignoring it like most series do. I'll probably fast forward through some of the scenes, but still plenty of material to like in this series.