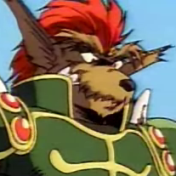 Villgust is a rather obscure anime OVA. Luckily, it's also one of those obscure animes that happen to be very good. Based off a relatively unknown game for the Super Famicom, this 1993 2-part epic follows two groups of heroes as they attempt to save their world, Villgust, from the evil deity Gavady. Only thing is, these two factions are tricked into thinking that the other is their enemy, and trouble ensues. The story is actually very exciting, especially when the misunderstanding leaves their two strongest warriors in little condition to fight when things are at their worst.

The characters that constitute our heroes are a memorable and highly entertaining bunch. Perhaps the biggest stand-out is also my favourite, Murobo, a dog-man with enormous strength and axe-fighting abilities. He also is a kind soul who wishes to help others. His crafty partner, elven boy Bostov is quick to use Murobo's goodness to his own gain, until Murobo grows wiser to his intentions... Their group also has the sorceress Remi and the crazy girl-cat Ryuquir, whose ongoing game of tag often easily destroys enemies. The other faction has chivalric Kui, princess-turned-warrior Chris, bumbling swordsman Youta and intrepid bowswoman Fanna. The characters work like magic together, especially Murobo and Bostov (polar opposite personalities). Gavady's henchman is also hilarious.

The animation in the second part of the OVA is better than in the first. This is a very well-animated OVA on the whole; the whole visual side of the movie is excellent. The music is also very good, especially the excellent theme song that plays over the closing credits of part 2.

I am sad to see Villgust so underrated here. Destined to obscurity, it is a charming and often thrilling anime with great characters, animation and entertainment value. Even if the first part takes way too long before it introduces Murobo's team. Oh well.