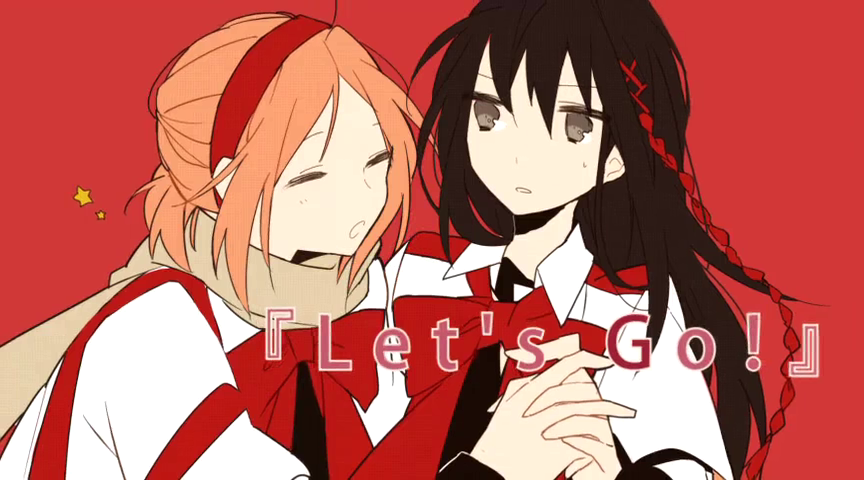 I was surprised by it and the way it was set up. I don't usually watch anime like that but I took the chance and loved it.

Yeah, it's awesome! I'm really curious about what happened at the start of the first episode though... The art style is adorable! Eruna is really cool, I love her boots! I need to find a pair somewhere... I love her toy gun as well! I really wanna see Kyouma being nice because he just seems really mean right now -_- I can't wait for the next episode >.<

Those clubs sound like the most interesting ones! The drama club does look fun :D

Yep! I was almost crying when I found out because I was so excited! It's gonna be called Mikagura Gakuen Kumikyoku! That's just Mikagura School Suite in Japanese though! It's gonna be released sometime in 2015 :D

I still haven't listened to all of the songs or started the manga xD I will get around to it at some point though!

I'm starting to get ready curious about him now >.< I need to know more!

Sadamatsu does look really interesting! I'm really curious about what kind of song he would have though...He might look scary but he's really not! He's a great guy!

I was looking at the anime chart for 2015 and it was there! I did a little research and it looks like it is getting an anime! I still haven't seen the KagePro anime, is it that bad? I've heard it was really good!

I know! I've been waiting for an update for so long!

I'd probably join the Astronomy Club or the Manga Research Society! Or maybe the Art Club so I could talk to Kyoma xD I'm terrible at art though T^T What club would you join?