Kin-Iro Mosaic is a slice-of-life / school life show so don't expect a story. This show revolves around Shino and Alice and their daily lives. But this is not a bad thing; shows without any story can be just as entertaining as show with a story.

However this show does not stand out above any other regular slice-of-live / school life comedy shows. The only exceptional feature is the cuteness, so expect a lot of those. But for me personally that isn't enough.

The biggest issue I have with this show are the main leads, Shino and Alice. They are the least interesting and very bland characters. The side characters Aya, Yoko and Karen are a lot more entertaining.

A short intro on the characters:

Alice is a British girl who flew over to Japan to live with her best childhood friend Shino. Alice is small, cute and British and not much more.

Aya & Yoko, Aya is a shy girl who always sticks close to Yoko who is a tomboy and pretty dense. These two were the most interesting characters in this show, their reactions towards the others and their interaction were the best. But Aya seemed to have some weird Shoujo-ai feelings for Yoko. For those who don't know what Shoujo-ai is, Shoujo-ai is the love between two women, or in this particularly case, the love between two girls. This gave some funny and cute scenes but it felt really out of place, like this was added to improve the shows sales.

Karen is another British blonde girl who transferred towards Japan. Karen is very....unique, Karen is Karen. She was a funny character but if she would have a bigger part in this show it would have become annoying very quickly, probably. So it is good she remained a side character.

Overall this is good show to watch if you want to see cuteness. But if that isn't your taste this is a forgettable one in a million comedy show, a show to watch for a few grins if you got nothing else to watch at the moment.

Note: the musical at the very end of the last episode was nice to watch. 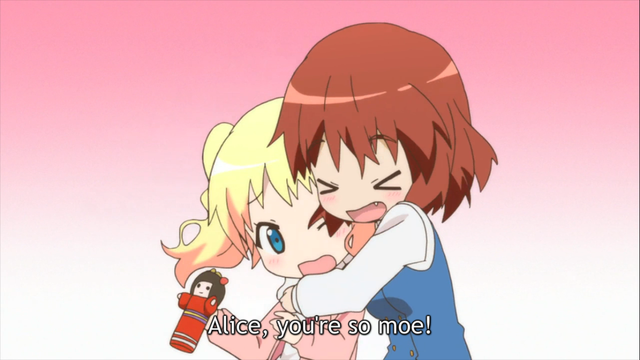