A disappointment to a great artist.

I've learned a lot through this anime. I learned what a mastermind of horror Junji Ito is. I learned about the passion he puts into his art, his work, and the amount of artful awesomeness to be found in every panel. I have no appreciation for horror as a genre or an art form. I'd go so far as to say I hate horror, but what I do have respect for is when an artist puts all they have into something, a genuine love for it. That's what Junji Ito's works are, in manga form, as people have told me and I've seen a few of them.

I also learned what a goddamn disappointment a mediocre anime adaptation can be. DEEN are a bunch of fuckwads. I have no respect for them.

The stories chosen are bad. I don't know if the originals are as bad but the anime, with its shitty atmosphere, dumb directing and shoddy art definitely don't help the apparently poor story choice. I'll have trouble talking too much about the story. It's episodic, and most of the episodes are lame. They suck, they're not creepy in this form, and sometimes they're literally laughable.

I've laughed at this anime quite a bit, and not when it was the desired reaction. Souichi was supposed to be funny but I didn't laugh at him, I laughed at hilariously timed deaths, the comedic timing this anime accidentally has and the downright silly nature of some of this stuff. It's hardly ever actually scary for me. 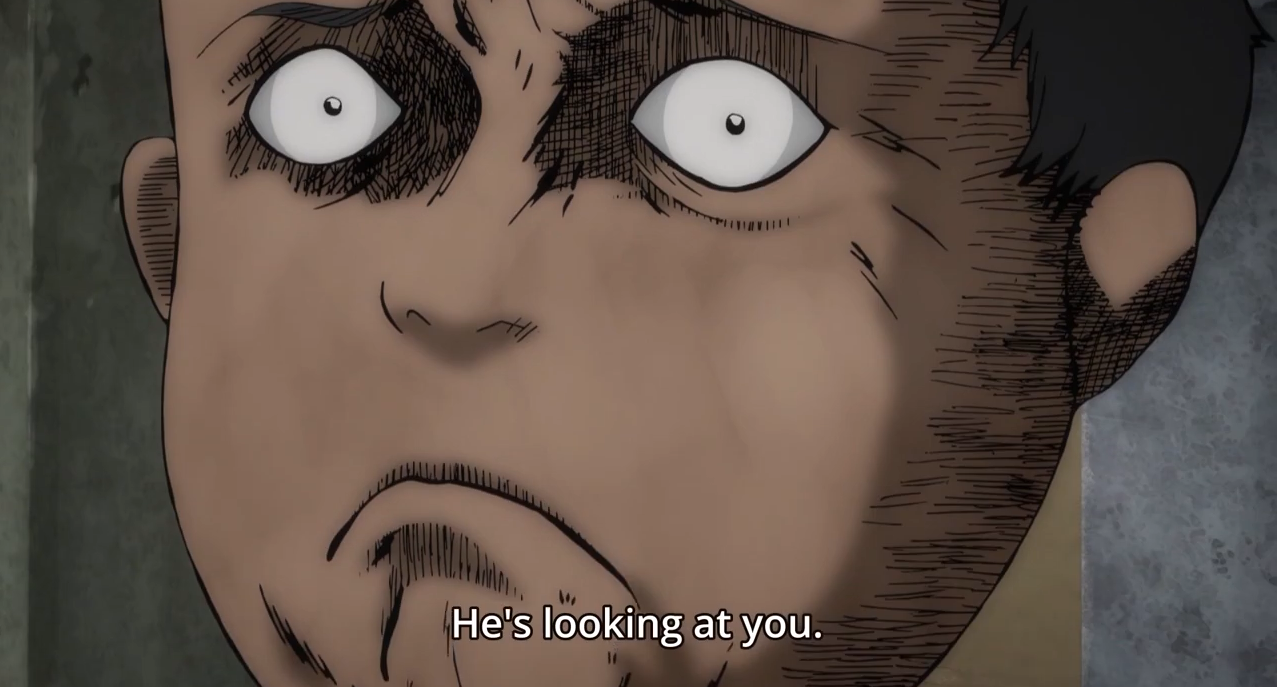 Yes, this is actually supposed to be scary.

The characters are literally throwaways besides the cool ones which they hardly ever use like tomie and sometimes soichi. I just don't give a shit about any of the rest.

The animation... oh God it's just never good. The art looks terrible nearly all the time and definitely doesn't compare to the manga from the few samples i've seen. There's no vision behind this. I can't nearly do the disappointment justice with this review. I'd reccomend looking up SuperEyeatchWolf on youtube for the review this anime deserves, but i'll suffice it to say I hate the art an animation.

It did manage to gross me out a few times though through the Snail Mouth story and Glyceride(this thing literally made me want to vomit and go on a soul-searching journey through the mountains). That's about the only reaction other than disappointment and mocking laugher i've gotten from this anime.

It sucks. Avoid it, even if you're a fan of horror, I'd say.