Dec 30, 2017
Read other reviews of My Girlfriend is Shobitch

*spoiler-free review (not that it matters)*

Gross. If I had to choose one word to describe this anime that's the one word I'd use. Gross characters, gross story, gross presentation, gross artstyle, disgusting everything. It really all just sucks shit in every way. Now, I don't hate sex jokes, I can find myself laughing at a phallic reference or two but every second not even ashamedly throwing it in your face over and over and over until it's so unfunny it's become offensive to your intelligence is so far from acceptable I'm considering undergoing therapy to forget the experience of ever watching it.

The narrative(story) is simple and so shallow an ant couldn't drown in it, and it's invariably "this is a euphamism and this is the character thinking about it" for a few minutes until they move onto the next one which is the same thing, not worrying about how the audience feels about it as long as they're ok with sex jokes enough to have a dictionary of them animated with no other characteristics whatsoever. And the characters have no other characteristics except sexual references.

HOW FUNNY IS THAT 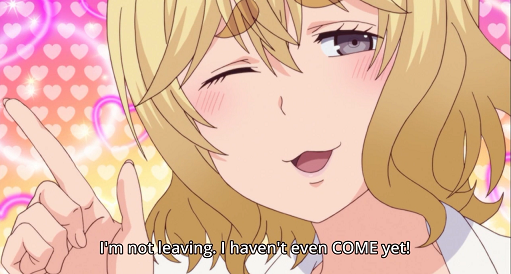 they even introduce characters like this one who are supposed to be overly pervy even though it doesnt work because every line everyone besides her says is a euphamism.

Isn't it funny how all the characters are thinking about sex, isn't that crazy? Isn't it sooooo nuts and funny?!?!

The artstyle is so vanilla i can't even comment on it and it has no animation worth noticing.

Sound? I had the volume turned down for most of it.

What Shobitch ultimately does wrong is assume that all it has to do IS make sex jokes to establish itself comedically but all it ends up doing is annoying the shit out of and disrespecting the viewer without ever giving us a real reason to care. To me, that's failure. I can't even appreciate what it was trying to do. It's trash in every sense of the word and it would have more entertainment value if you were watching it while taking a shit.