Cranking out a movie adaptation of a current mainstream shounen seems like it's becoming the more and more popular thing to do, so why not take advantage of the existance of a spinoff that adds nothing to the world or characters. Under such a popular IP, it's sure to make a quick buck regardless of it's quality, so this kind of thing is easy to shit out with a big return on relatively low investment.

That prospect may sound good, but it sounds even better if you're MAPPA and you have some idle slave labor to throw at it and not pay. Thus Jujutsu Kaisen 0 was born.

This film has all the same kind of animation and visuals as the main series. There's nothing special or unique about the artstyle, it still looks like bleach but without any personality or individuality. The dull and washed out color grading, bad lighting and shading, and poorly composited backgrounds are back here too. There is no sense that this is a movie production besides the fact that it played in a movie theatre, which gets me thinking that the ugly art is not due to time constraints, and the people working on it are just not that talented in anything but actual keyframe animation. The keyframe fight animations themselves are of course, still good, because the animators would have even less than nothing to eat if they weren't, and hey if that's what you want out of art, just good animation without anything else added to the visual or intellectual experience of the medium, then I guess this is for you. 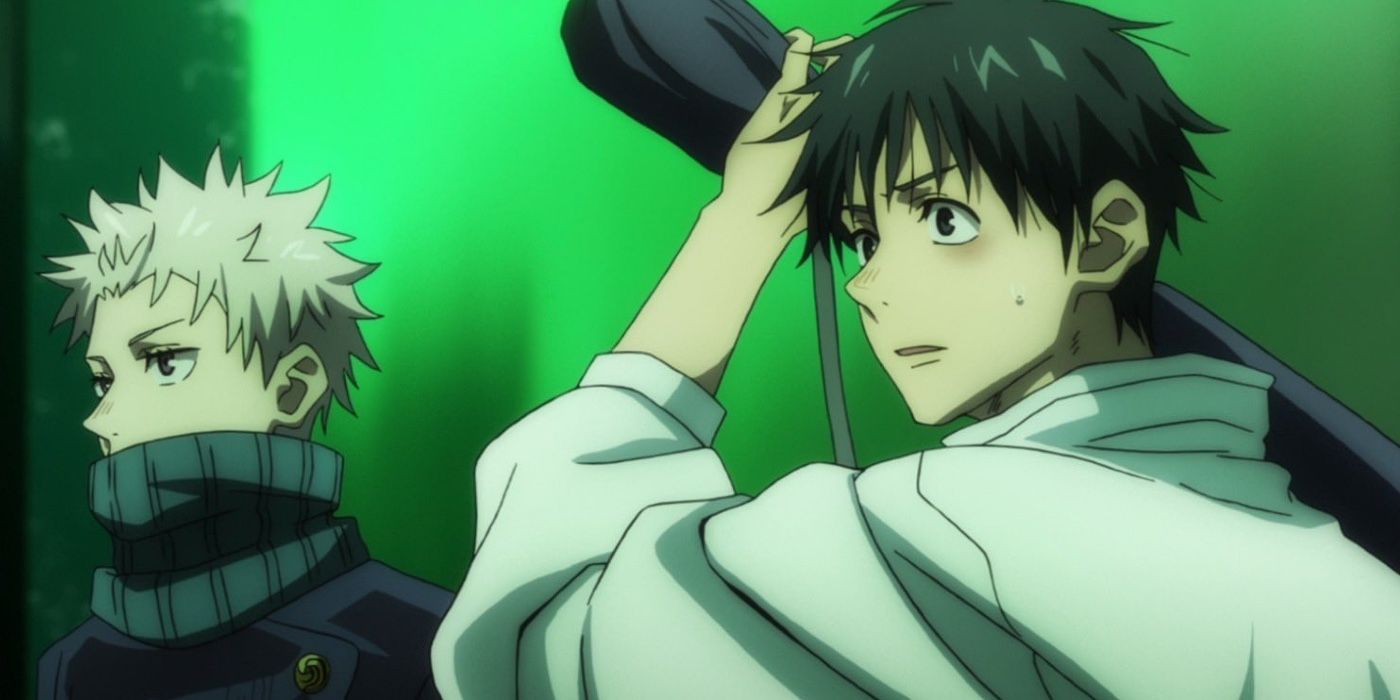 The story of this movie is extremely simple and predictable for a movie, but what's more, there's nothing original or interesting about it. It uses the exact same premise as the main series to start out with, just a bit less interesting, and then fail to build off it just as much. Yuuta is an alternate universe Shinji from NGE with a dark secret that nobody knows: there's an evil spirit following him around that kills people. Eventually, way too late for this to take place in a world with actual humans with eyes, some people figure that out and take him captive so he uh... for the greater good of humanity and shit. But then one man has the bright idea to train him up instead of keeping him captive or killing him, and everyone listens to him because he can basically fart and kill them all. Yeah. It's Gojo, and it's not a different version at all, he's absolutely no different, but you know it's the past because he has a white bandage on his eyes instead of black. Very distinct. He goofs around, acts wacky, and never interferes with the plot except for when the characters who would actually be compelling would struggle at all, in which case he saves the day by shitting out a big energy blast and everything's cool.

The main character can't control his power at first, but then he does it by doing it. This way, we don't have to expand upon this premise in an intelligent way and instead just go right into the braindead shounen action, and a few people he meets join up with him to help him fight hollows... or demons... or whatever.

Then an evil guy who wants all the people to die shows up and he tries to beat him but fails, but it's ok because he gets an emotional powerup and then Gojo finishes it, because having a character struggle and overcome something realistically is something that would be way too interesting to happen in this show.

Does any of this sound familiar yet? It should, because this is the exact same plot as the show. A few names have been changed around, but really nothing's different, all the same characters are here and they're the same as they were before. We don't get to expand on them either, we learn nothing new. If you think that sounds like a waste of time then congratulations, you watch things with your brain turned on.

The main villain's motivations are as shallow as the calcium buildup on a glass in a crummy dishwasher, as is the rest of the plot in this movie. He's a sorcerer, whose role is to protect humanity, that wants everyone that isn't a sorcerer to die. And what self respecting sorcerer wouldn't want to commit genocide on the people they were conscripted to protect? Exactly. Geto feels the same way. To the point of actual racism against people that aren't sorcerers, even though the only difference is um... I forgot actually. What's special about sorcerers? Can't anyone be one? Yeah. Your guess is as good as mine.

The only redeeming quality the main character has is that he's not special or talented to begin with and he's just unfortunate, and has emotions, which instantly makes him a better main character than the one from the main series, except I guess the author realized this so he ruined him by instantly powering him up using emotions, and deciding that he actually had a hidden power because he's the chosen one at the last second so he can just do shit other people can't. That very well destroys any relatability or investment we had in this character now doesn't it?

Yet another addition to something with zero sense of individuality and nothing of substance besides pandering to the lowest common denominator of anime viewer who just wants to see an overpowered character flip around and watch a flashy effect every once in a while, but gives no shits about writing or good character development.

If this is your first anime movie, you might like it, but if you've ever seen a shounen before, you've seen this done better. In fact if you've seen Jujutsu Kaisen, you've seen this. It's the same plot. There is nothing different. The only difference, the ONLY difference is the main character shows human emotions, but to a very limited degree.

Note: I watched this movie without subtitles and I still caught every detail. That's how shallow this movie is.