Mar 24, 2020
Read other reviews of Keep Your Hands Off Eizouken!

I Want to Make Anime!

Jesus christ, where do I even start with this one. There's a lot of personal appeal this one had for me, and it's hard to exactly pinpoint down where it all came from.

Eizouken is an anime about three middle school girls who want to make animation, in a film club they founded during their school lives. The episodes follow their escapades in the struggles to get animation done, covering all the nuances of the process, as well as the creative process and expressing best it can the pure passion and spirit of those who love anime.

This lively, imaginative experiment of an anime from Studio Science Saru and director Misaki Yuasa is a bold, creative method for sharing the collaborative passion that people involved in the industry have for the artform. This passion is directly reflected in many of this anime's characters and it shines through every scene of its simple story, in a way that's sure to touch the soul of everyone who loves animation.

Misaki Yuasa's philosophy of creativity is apparent in every single frame of this anime, from its presentation down to its more subtle elements. Each character represents one of the three distinctive aspects of anime production; Midori Asakusa is the director with a creative vision, who comes up with inventive fantasy concepts and is used to building a world unique to her mind. Tsubame Mizusaki is a media influencer who doubles as the Animator, the member with the most eye for detail who has a passion for making things move. Sayaka Kanamori is the producer, a ruthless overseer whose job it is to make sure projects actually get done, reigning in the other two and securing funding. The defender of the club.

However these characters aren't just hollow representations of concepts, they also have their own charming personalities and chemistry with one another. 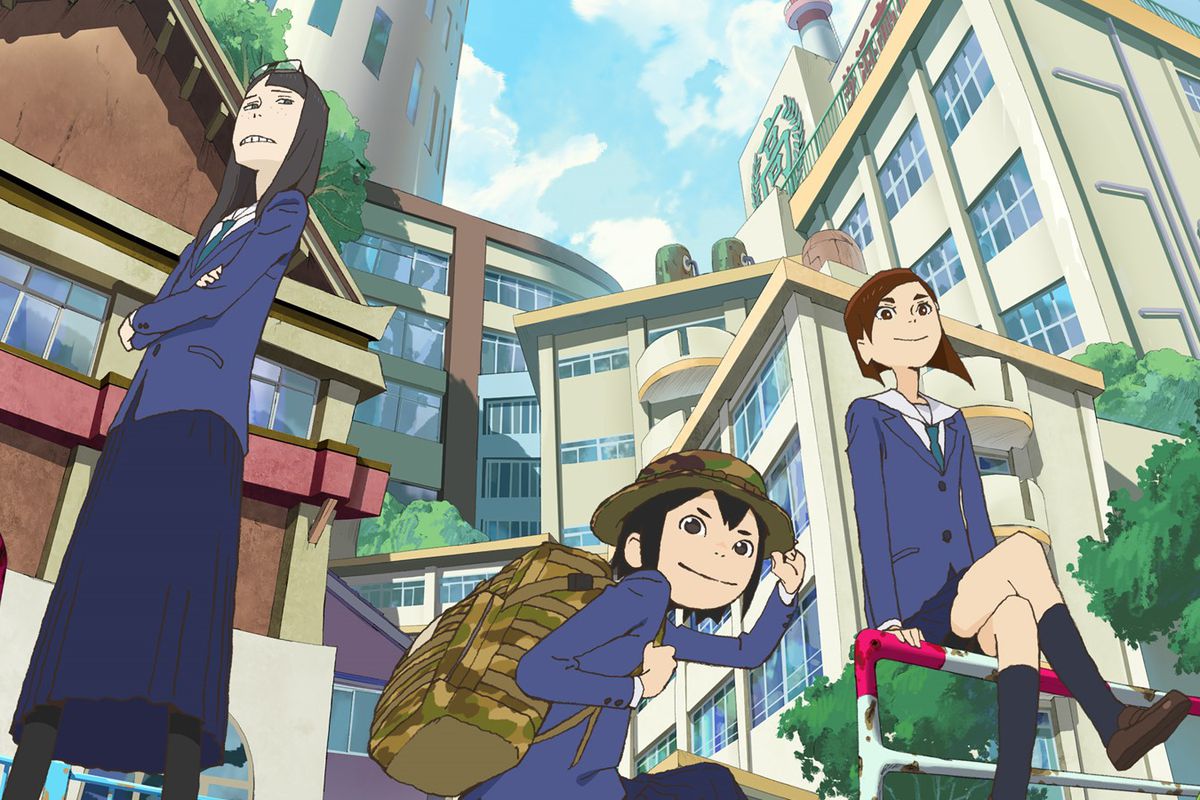 Not just focused to animation, the girls will also manage to be relatable to everyday life, with every episode tying something involving animation into the real social lives of these three.

Another thing I have to praise is the character design choices. Instead of the typical dainty samey anime girls that most series will have, as if rolled off an assembly line, the ones in this show all feel completely distinct, even apart from the main three. Every character in this anime was designed with a personality in mind, not a gender. Yuasa wanted to avoid animating them "like girls", specifically telling his animators to avoid giving them specifically girly mannerisms. Which shows his philosophy on how characters move effect how we see them. The meta-narritive at play here is phenominal, but the anime doesn't just explain animation through words, it shows you how to do it right every step of the way just on its own merits. Without the script or story, this would still be a brilliant commentary on how to make an anime, just by looking at it and listening to it. The feel of it. It's distinctive, everything here has a purpose. It's honestly ingenius.

Each character also governs their very own type of storytelling. The show balances its own content out by focusing sometimes on Asakusa's ideas, Mizusaki's process of animation, and Syaka's ventures to defend their club. Usually each shift denotes a change in tone. Asakusa's portions are full of whimsical music, creative visuals that transport the cast into a conceptual world with sketchy-lines, an environment where she can test out all her ideas with the rest of the group.

Tax evasion is easy and fun!

Meanwhile, Mizusaki's register more on a personal level. Her status as an advertizing superstar and the "rich girl" whose parents don't approve of her hobbies play a lot into who she is as a character, but never distracts from how she shows off her talents. She takes the cake as my favorite character in the series because of this. Watching her go through the typical animator's process to get any single motion down to the last detail is incredibly enlightening. You'll be thinking, "gosh, so that's how they do it so well!"

I am destruction, I am death

It should really strike a chord for creative types who have always had one thing they're excited about in life, that plays into what they do when they grow up.

Kaname deals with the multitude of oppressors that want to make a stab at the film club/eizouken, her penchant for making money and intimidating nature paving the road for the girls to have an outlet for creativity. Her snarky attitude make for a good balance to the cast when Midori and Tsubami are goofing off, she's always on point, gaining her the acclaim of fan-favorite character, AKA "tall girl".

The anime makes sure to give all three main characters adequate coverage for their own lives and their interactions with the world around them throughout its Story. From acquiring a clubroom and materials to their first project, and then on through their different collaberations with the rest of the school. Each character gets an arc throughout it that shows their progression and development to the current day. These episodes don't shy away from giving the minor cast time to shine too, from the ruthless student council's efforts to shut down the Eizouken, to the other passionate people wanting to work with them in other clubs. There's no shortage of interesting personalities in this show outside of the main cast.

Of the world within this anime, it's easy to focus too hard on your subject matter and forget to give the audience a reason to care about whatever's going on, but this show is no slouch on that. The school these girls inhabit is a wacky environment, with a security club dressed top-down in riot gear all the time, a loud and over-the-top campus... everything is just so cartoony and bizarre around them, that even their fantasies aren't that much more crazy. The whole show just bursts with a sense of jovial fun.

The Animation is really what it's all about. Quite literally. This anime by its very subject matter, lives or dies by it, so it's super important that it be cohesive with what it preaches. And it does perfectly by that metric. The animation is some of the most expressive and fluid, merging with different artstyles and animation styles, experimenting all over the place. It's hard to put into words how great it is exactly. It manages to make the Eizouken's projects feel so distinct from the "real" world while also feeling just as high quality. Its dynamic approach to animation is difficult to ignore. I just can't praise it enough really.

Blending fantasy and reality, this anime makes as much use of the medium as it can, and it never slows down episode-to-episode. Keeping up that super exaggerated cartoony, expressive feel of Eizouken while maintaining the overall quality of how it looks. It's amazing.

Music is what provides a lot of the feeling to it. It's whimsical a lot of the time, matching perfectly with each scene and changing tone when needed. The director really knew what he was doing. The sound direction is phenominal and never feels out of place.

Keep Your Hands Off Eizouken is an anime that will inspire creative types everywhere. That's the first important thing about it, and the reason it has so much pull with certain people in the anime community. There are of course people who won't get it at all, why others love it so much. And there's no right or wrong opinion to be had on it. But hopefully this review can shed some light on why so many people, like myself, really enjoy it.