My favourite anime would probably be Bleach as it is awesome, I love nearly all the anime I've seen so far, coming in at a close second would probably Gunslinger Girl Il Teatrino, for third it would have to be a tie between Ghost Hunt and Ouran High School Host Club.

My likes in general;
Music I like includes Evanescence, Ed Sheeran, My Chemical Romance, Olly Murs, Abingdon Boys School.
DVDs I probably love anything so long as it has a good plot and I wont be disappointed by the ending, I cant stand sad films as they make me cry, I hate it when people spoil the endings for me as I always want to spoil them for myself.
Books I'd probably read anything, like right now I really enjoy readng Harry Potter, my favourite Harry Potter Book would probably have to be the Order of the Phoenix, but I enjoy manga as well, like Bleach, Shaman King.

I enjoy hanging out with my friends, I really enjoy things that have a realistic touch to them as well as a bit of action or fantasy. I don't have hardly any friends who like anime so I find myself talking about it randomly. 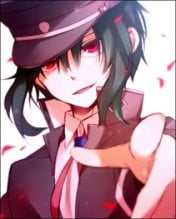 Yes indeed. That is my name. :D

You needed a profile comment. So here you go. :D