ya 5 centimeters per second and welcome to the nhk are bpth amazing too! 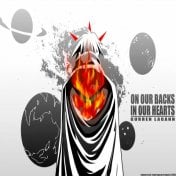 Yeah, I really liked NHK and I think it didn't have any episodes or parts that I didn't like. The only reason that Gintama is on top of my list is that it is longer and at same time it can be so good. Usually long series can get boring but not it. (oh, also because I read one piece instead of watching it)

good top 5 list watched 3 of um and read death note (still need to watch it), plus beck on your top 15 sick!

Wow! I saw your signature on the forums and clicked here...every single one of your top fifteen is on my 'to watch' list, except ToraDora. How odd is that? You have awesome taste, at any rate! Just wanted to drop by and post that. :)

Yes, Gintama is pretty light mostly, but there is some really deep parts. When you get to know the characters you will most likely begin to laught at things that other people would miss, because you just know the characters so well and they have real personalities that grow during the series.

Another interesting thing behind gintamas humor is that it is based on the fact trhat they live in really difficult times but still try to survive and live everyday to the fullest. This isn't mentioned everywhere, but it is quite sad.

The first season should give a good picture on the series, altought it gets better over time. As usual, first episodes are not the best ones.