Hi, my name is Victoria and I've been watching since I was eleven.

My Favourite anime as of right now is Prison School. 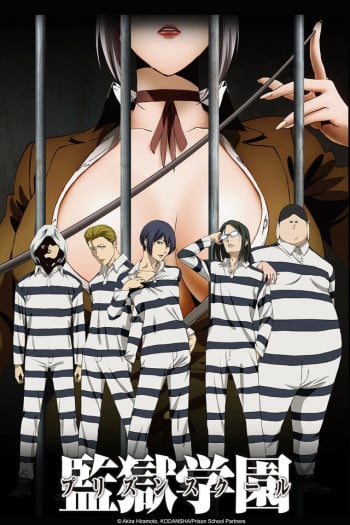 I am also a big fan of Kuroshitsuji.

Ani-Fact #1: I put off watching the last episode of Tokyo Ghoul when I was young because I was afraid of the torture scenes being too much. I'm cool with pulling the teeth out, but ripping his toes and fingers off too?

Ani-Fact #2: I used to watch all anime on YouTube before being graced by the existence of online streaming sites.

Ani-Fact #3: I've never read a manga offline and don't even know how. Is it Left to right? Bottom to Top?

Ani-Fact #4: I'm very lazy about watching anime and end up dropping a lot of stuff... my bad.

Ani-Fact #5: I dropped Death Note after something infuriating occurred (ep. 17) But after I finished watching it I'm absolutely obsessed.

Ani-Fact #6: Speaking of Death Note, does anybody else think the second opener is hilarious? I couldn't stop laughing at what the English lyrics sounded like.

The transition between the black haired, pussy kaneki that screamed at everything that happened and the "badass" kaneki that fights and has a screw loose is made by showing the deterioration of his sanity. In essence, Tokyo Ghoul is saying that no-one can transition from human to ghoul and stay completely sane: Kaneki, Shiro and Kuro are examples of this: you need to choose between your life and your sanity

Madoka operates on premise, introduction, and a world feel that are amazing, in that regard, I can respect your take on the story! I find intro's are one of the Japanese's strongest storytelling points (and part of why I love to watch anime so much!). As such, I also tend to be very hard on anime story endings, as those seem to be a struggle in anime and manga. Its possible I'm overcompensating for those who gush about how progressive it is, or maybe for how close I feel they came to a truly fantastic and edifying story before it went so wrong.
I'd love to compare notes with you, as you seem a perceptive person neither presumptuous, nor adverse to confronting difficult "deep" questions that frighten others, at least in the context or storytelling. Is there a good way to contact you (without cluttering your comment page)? I'd enjoy hearing your input and thoughts at length.

character worldview is one thing, but I'm refering to the overall story's worldview. A character can have a worldview that differs from the story's. A "collision in the way two characters think about things" is a good example of character worldview. You are perceptive to note that many characters tend to note worldview when they wax philosophical. While I don't consider it the tightest writing there either, evangelion is indeed a good example of a story where all the characters' worldviews match that of their world. They all acknowledge for a fact they are some twisted combination of evolution and the unnatural work of the demon lilith (which basically dooms everyone and everything in the story from then on, but that's another story)

What I'm referring to is story worldview. Another term might be "author's worldview", as it is rare for a person to write a story with a differing worldview from their own. Madoka tries to work with a dualistic worldview, which is not surprising, given its asian origins where that worldview is common. However my frustration is its attempt to take itself seriously when it has such blatent logical holes (see my original review).

This was what prompted my 2/10 review on story.

I mean from a standpoint of rating a show, what would you classify a story's worldview as part of: its story, its animation, its sound, or its characters?

I consider worlview a story component. Every story has one, even if its trying not to. What I'm wondering is: what makes you think its worldview doesn't merit such a low score?

I recognize a score as low as 2 sounds harsh, but I ask you: what would you categorize the worldview of a story in if you don't think it constitutes a part of the story's plot?