A black & white anime that aired in the USA in the early 1960‘s. I recommend it, epically if anime history interests you. 8th man was the first cyborg hero and one can tell this has been the inspiration for cyborg heros for decades to come. I rated it not by today’s standards, but the standards of 1965, so I left the individual ratings blank & gave it a 9 out of 10 for it’s ground breaking work.

The plot: A dective was killed and his mind was moved to the body of a super robot. The episodes chronical his adventures as he fights criminals and protects humanity while keeping his identity a secrete from everyone but the chief of police and his creator, of course.

Some have been harsh on rating this show but I do not think that is fair. It was originally on 35mm film in Japan for 55+ years. This medium dose not age well even when stored properly. They did the best they could when they re-mastered it. Color was available at the time, but it was new and VERY expensive, so I can understand why this is in black and white.

Archivists all over are scrambling to digitize all media they can find & are budgeted for (Dr. Who is a good example of this. Many episodes were lost). The US publisher has graciously put the episodes on You-Tube, which is where I watched them. There are a few missing episodes, but each episode is complete, so it dose not effect story flow.

Remember, animation in the US then was targeted to children. As such, the English Dub version was sanitized & simplified for the U.S. children of the early 1960‘s. Episodes 55 & 56 (The best in this series in my opinion) were fan subtitled and the difference was obvious. Much more sophisticated and darker than the English dubbed episodes. Me, I would very much like to see the entire series subtitled in English based on the original Japanese script.

Episodes 31 and 41 are subtitled in “English”, so they say but the ones who did the subtitles did not know a word of English & the subs are gibberish. I think they just typed random sentences from a first year English class book since they got 2 words of Japanese to English correct. I watched it and turned on You-Tube subtitle option. A bit better.

The rest are English Dubbed. The voice of the U.S. actor who played 8th man set the standard of what we now call the "typical" male hero voice.

Despite the minor technical problems, overall I still enjoyed this series. If things need to be perfect, this might not be for you. If you like seeing the source of anime ideas or enjoy vintage anime, then by all means, watch it. 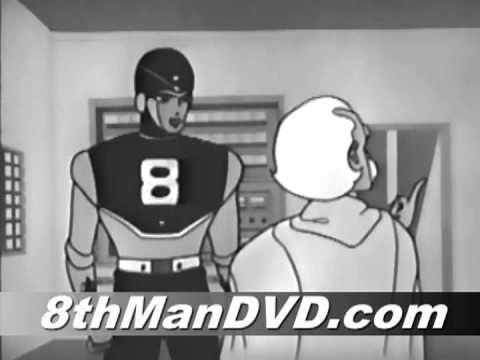