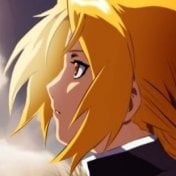 Hi MrsElric! yes, I love n rewatch Kill la Pantsu and Pantsu School. they have a catchy premise that delivers, great characters, great art n animation and are just so much fun! I don't hate ecchi on principle, just when it has nothing to do with the plot and is therefore distracting or demeaning to the characters - fanservice, basically (I presume that's what you don't like about them, because that's what they have in common, but correct me if I'm wrong). I also agree and like that everyone is free to have an opinion, though not all of them are equally or automatically deserving of respect, maybe mine included :)

And, if you don't mind, I'd like to take a moment of your time to explain why I gave "story" a 1: I was judging it on its own but also as an adaptation. (Admittedly, that might be a slightly unfair criteria, but...I went with it anyway.) And, while it's a choppy film on its own, it's a terrible adaptation.

As I mention in my review, the movie doesn't adjust enough for the confines of a 2-hour film. (12 episode series would have been much better, absolutely.) If they were going to tell this story, they needed to cut and/or rearrange or wholesale change A LOT. Which, honestly, KyoAni could have done and done, I think, extremely well.

This is my absolute favorite moment from the movie. I just love it to pieces. It's everything you need to know about the relationship these two are going to have from this point onwards...in a 10-second interchange. And...it's not in the book. This is the studio taking what's in the book, distilling it down to its essence, and making it consumable for the silver screen.

It's just wonderful. And I cannot understand why the decision wasn't to do more of this with the story. Sure, it would have been a very different version of the story, but it also would have given us two excellent versions of the story. Which would be double the awesomeness.

Like in my review, I encourage you to read the manga, if you have the inclination. Even with some of the wonderful twists in the story having been spoiled by the movie, I think it's still entirely worthwhile.