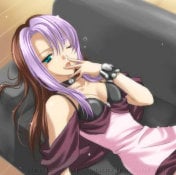 Aug 5, 2019
Read other reviews of Hakuouki: Demon of the Fleeting Blossom

I had heard that the anime adaptation of Hakuoki was horrible, but I've actually enjoyed this a lot. It's quite a great summary, because all the things that happen in these 12 episodes take place during several hours of reading and decision-making in the game, butI feel you get to see every important detail that is to know to understand the whole plot.

Unlike most otome adaptations, it sticks to a single route but shows bits and pieces of other routes, and it does it PERFECTLY. It reminds me to Code: Realize, they did the same and the anime didn't feel like weird or butchered (like the Amnesia anime did).

You also get to see different scenes from the game that you know have taken place but that you didn't get to see for one reason or the other, so I think that the overall story is quite complete even for the people who haven't played the game, because they even get stuff we didn't that makes they story more cohesive.

The animation is the only thing I don't like that much, but the ost is quite good.