I'm Mitsuki, a crazy genki and sometimes tsundere girl from Germany. :D
My bad, I'm  not good at talkin' 'bout myself but I love anime more than anything else in this world.
But I wouldn't call myself otaku. nope.  Great Fan fits better, I think and Anime is really something what saved my life many times.

My first anime, since I knew what anime is, was Pokémon and I love it still.  But more the games and the manga now, than the anime itself.

But the anime I love the most and that is REALLY special to me, is Yu-Gi-Oh! Especially Yu-Gi-Oh! GX and Yu-Gi-Oh! Zexal.
You can say, that YGO is my world. It's precious to me. It gives me a feeling, I never feel when watching other animes.
But only in japanse. I find, the dub version is a big disgrace, if you ever watched the japanese version. The japanese version is so good and give me so much feels. It makes me laugh, makes me cry so many, many times. But the dub is terrible, because of all the stupid censorship. And I never want to watch my beloved anime of all time in this terrible dub again.

Well, what I could say more 'bout me? I love to draw and to write fanfictions. My style of art is more shounen style, 'cause I'm reading more shounen manga than shoujo and I think Kazuki Takahashi had marked my drawing style.

I'm not a big fan of Shoujo and Magical Girl, exept Mahou Shoujo Madoka Magica. That was a good one. Not one of those glitter-stuff.

Uhm what should I say?  I think that's all I could say now. But if you want more, don't be shy to ask. 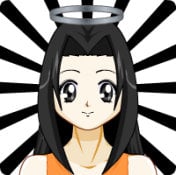 Your welcome and merry christmas!

Hope you get to find lot of new anime/manga, make lot of new friends and enjoy your stay here !!

Feel free to write me back!

Hello and welcome to anime-planet. ;w;