7/18/19 - Rest in Peace, all of the victims of the Kyoto Animation studio. It's an absolute tragedy what happened. I can only hope that they will find some way to recover.

Hey guys and gals! I'm trying my best to not turn into the stereotypical jaded viewer, but I've definitely been through Gigguk's lifecycle more than once already. I've been watching since I was a kid, and these days, I go at my own pace, with the intent to make it last a lifetime. I rarely, if ever, try to keep up with the seasonals, instead preferring to wait for the best to bubble up for me to consume. At times, I'm watching 5 shows at once. At other times, I don't watch anything for months. My watching slowed to a crawl for a few years there, but I've been picking back up, lately.

Although in the end, I believe every review and rating is subjective, I like to think a little bit before I rate most of the shows I've seen, and generally try to consider several different factors. However, I don't have a set formula for doing so. I enjoy discussing different viewpoints about shows I've seen with people I've met, since I think that most people have some constructive new perspectives to contribute to my thoughts about a show, whether their opinions are positive or negative.

I am always looking for new anime recommendations!  I need something fantastical, engrossing,preferably (although not necessarily) dark,  something I can become fully immersed in, something that makes me appreciate it both as a work of art and as an exercise in thought. Kara no Kyoukai left a big impression on me and, in terms of anime anyways, I haven't really moved past it since I saw it years ago. I've seen comedies, romances, dramas, and even some more fantasy/horror stuff since then, but none of it really left me satisfied. I have an ever growing list of shows that I want to watch, most of which seem mildly promising, but in the end I wonder how many more of them will be disappointments! As time moves forward and anime continues to progress along the path of endless moe, slice of life, and isekai, I continue to explore deeper and deeper into the golden ages of anime of the 90s, 80s, and most recently, 70s. Please, if you think you have something that I might enjoy, let me know!

One last thing, if I could: I would absolutely rename my "I'm not a fan of these characters" as "Wall of Hate." Thanks for encouraging me, shiftr. :p

practically had my father take this out of Blockbuster every week!

Characteristics in anime that I have a bias towards (descending order of importance):

Studios I Love (Most of the time):

If I was told that only 12 anime are allowed to remain in the world, and the rest are to be thrown into the fire.... (in no particular order)

Encourage Minai99 to add some by leaving a comment below! 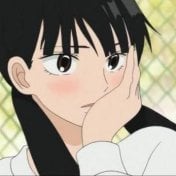 Had to give you a follow once I saw that profile picture and banner.

Hi Minai99 and thanks! I'm curious which anime from the list caught your eye.