Hello Fellow Earth User... or whatever planet you might be from (being on that subject, Neptune is a pretty cool planet, right?)

I getting old here, been around for some time i guess, anyway, i love anime of course, always have and will, few media types can make me laugh and cry quite like a well written anime can. My favourite genre are probably romance and slice of life but i like most stuff really (especially a sad story!). I'm from the UK if it matters.

Okay these probably aren't my top but they are good enough!

Don't Judge my old reviews/ratings before 2017, i used to happily throw a kind 5 stars at anything and everything, same for reviews, i wrote/gave dumb and useless reviews, i have growns since 2011 (wow i been here almost 10 years!!!) and just can't be bothered to edit my history.

4 Stars - very good show, meeting the above standards to a lesser extent

3 Stars - Average show but likeable enough to watch, nothing new/special but still entertaining

2.5 Stars - I mentioned but score is it's generally a either average show which didn't appeal to me or it falls short of average but only slightly.

2 Stars - Boring or unappealing in  some way, generally i wouldn't have enjoyed the show and wouldn't recommend it

1 or less - Terrible show with either terrible trashy characters and a stupid plot in which it's more of a headache to watch than it's worth.

these scores are just my opinion of my level of enjoyment, genre's which don't appeal to me obviously wont score well despite they might be universally loved, it's just opinion baased. Again, ignore my older ratings, i was prone to give a "average" show i watched as one of my first anime's a 5 just because i liked it and it was new.

Hello Madoka. Hope that you have been doing well. Its crazy how long it has been and how the years fly by, but I was thinking about you as I returned here to make major updates to my profile and anime list and the long conversations we had years ago, and would certainly enjoy having new ones!

Think its fair to say our interests and tastes in anime have both changed and evolved over the years as we've seen more and changed as people.

Haven't kept up with a lot of recent anime as my new way of anime typically involves straming services such as Netflix or Hulu while I'm eating a meal. As a result I only see 1-2 episodes a day typically unless I'm in a binging mood. Generally am unable to watch a ton at once like I used to now that I'm a working adult rather than a young high school/college student that I was almost a decade ago.

I saw on your profile that you have a new rating system and that many of your past ratings are outdated from how you feel now. I understand that feeling. There are a lot of anime I thought were amazing years ago that I look back on, while many of them are still good, they aren't quite as amazing as I remembered from back then. 11 Eyes and Madoka Magica are prime examples for me. While still very enjoyable, now I more easily see a few flaws in them that prevent them from being full masterpieces in my eyes.

The anime that set a new standard for me and motivated me to adjust my entire rating system to account for it was Violet Evergarden. It dethroned Elfen Lied on my top 5 list as the #1 anime for me after Elfen Lied held that position for roughly a decade. I recall you also enjoy great emotional journeys such as Clannad and Angel Beats. Violet Evergarden will certainly not disappoint in that regard if you haven't seen it yet. I highly recommend it.

Other than that, I've also still read a lot of VNs and have been playing games in free time. Mostly JRPGs.

If Nagi no Asukura is still your number 1 favorite anime, what are the things you enjoy most about it? I'm curious to hear about that.

Nagomu's annoying. There's nothing "appealing" about him, but you do you, man. XD 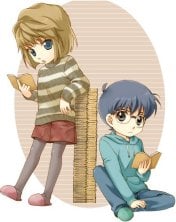 in you top5 anime i like how Anohana is both 2nd and 4th :D

Hi! Just found your account and I think we're kind of similar xD we both share some shojo and 90's-popular anime in our watched list! Also I'm 29 :D
And yes, HYOUKA is amazing <3 Based in your interests (and if you're hungry for a shojo) I would recommend Kono to tomare :D

If you want to recommend me something be my guest! Byeee :D