I have been looking into this series for some time now because to me, it seem like a fresh idea that’s waiting to be made into an anime OVA (and yes, I know it’s based on their light novels and manga, too.) with it having these super-secret spy/James Bond-type tone as it shows throughout the whole course. This could be one of those anime that has the cool factor going for it, much like Shinichiro Watanabe’s anime (you should know what he directed by now.), but hopefully it’s not just the cool factor that keeps it entertaining. How well I know? Well, let the review begin. 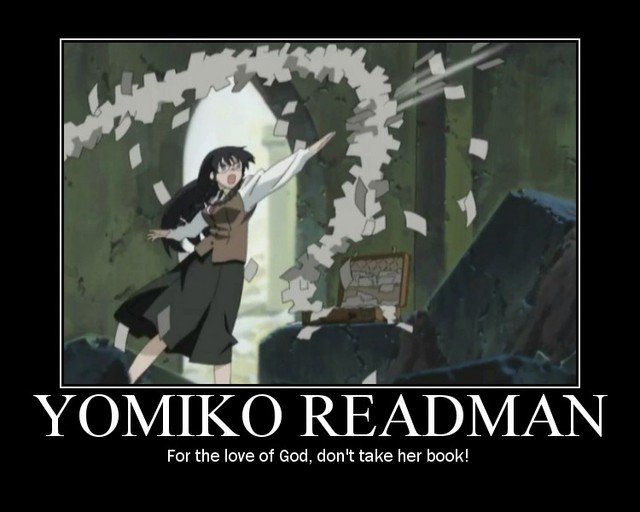 Nerdy Yomiko Readman is obsessed with books. As "Agent Paper," she works for a secret branch of the British Library, where her power to telekinetically control paper helps her on missions to retrieve rare manuscripts and protect the world from evil. But all Yomiko really wants to do is read her new book. Unfortunately it has been stolen by the I-gin, clones of historical figures who believe Yomiko's book holds the key to unlocking Beethoven's lost "Death Symphony." Anyone who hears the tune is compelled to commit suicide, and the I-gin intends to broadcast it all over the world. Only Yomiko, along with fellow super agents Drake and Miss Deep, has a chance at stopping them.

OK, I’m just going to say this……I had fun with this anime and as much as the plot doesn’t go that deep, but then again, it is a three episode OVA clocking in at 96 minutes. The plot may seem silly and nonsensical to most people, but it isn’t too distant from reality, it’s not like “GAINAX!! OMG!! CRAZY SHIT!!” type of nonsensical; it’s much like a good action film, whose purpose is to entertain us with how unreal it is without being bored and easily distracting itself from its plot. I will say that using paper as weapons more powerful than they appear are a plus in my book, because after seeing that, I imagine somebody challenging someone to a gunfight and someone made a drawing of a gun and then it came in paper form and it did the job of a regular one, but more deadlier.

Characters in here are a delight to watch as I really love the main character of Yukiko Readman or “The Paper”, as she is called here to be equally adorable as a nerdy bookworm character and capable of her being in a fight, especially that part, and considering not many of those exist in much anime….at least the ones I watch. There’s also Nancy Mukahari (or Miss Deep, which does sound a porno name…..and yes, even in the OVA, they reference that.), the token bad-ass female character with a shady past and Drake Anderson, the lone male member of the team.  The dynamic budding relationship between Yomiko and Nancy is actually the only thing I see in character development and progression. Some of the other characters like Joker (not the one you’re thinking), Drake, and the other super villains don’t really stay in our heads and some are just unimaginative characters like Joker is stereotypically posh and English and Drake is the no-nonsense American soldier. They are fine characters just nobody I would give a shit about. Studio DEEN’s print is on the animation here and knowing their reputation of shows, the animation is solid for most parts here, as I often see a few hiccups even during the paper manipulating scenes. I wouldn’t count it as vintage, maybe even for it being 11-12 years old since its release in 2001 or ’02. I did like the opening theme and sequence of the show, as I’ve said; it brought out this James Bond / superspy tone that fits perfectly into the OVA.

The dub by Manga Entertainment is a fine dub with some good performances with Kimberly Yates, a relatively unknown voice actress, did capture the kindness and bookworm’s attitude of Yukiko. Amanda Winn-Lee, who also directed the dub, was good as Nancy, delivering in the deadpan humor within the character and of course, Crispin Freeman playing the not-so-subtle Joker and you can tell he was hamming it up and having fun in his role.

FINAL VERDICT:  You can check it this OVA. It may not go deep within the plot that much but as you watch it, you start to not care that much, that is if you’re enjoying it but if you didn’t, then I shouldn’t recommend it to you. For those you have liked it, the series is available to get, although you might have to pay some high prices and something else to go with it…….but we’ll get to that later.