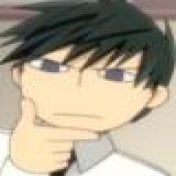 Innocency. A cutesy form of saying "Innocent" which is pronounced as "Inno-sensei". Yes it's a lame pun but it's a pun none-the-less. hehe ^_^

I've been interested in anime for quite some time, and I like a wide variety of genre's. Though I perfer anime which include various mysteries and suspense (such as Darker than Black, Code Geass, Death Note, etc.) or comedy series (Gintama, Welcome to the NHK, The Wallflower, etc.).

I have a huge collection of anime, both in Japanese and English dub... A collection I haven't even got round to fully watching yet (all series I've got but not watched are marked as "Stalled"). I've got around 500 gigs of anime at the moment, of material which is not readily available outside of Japan. However, when an anime that I like or watched a sufficient amount of is released in my territory, I will buy it to support the industry. I perfer boxsets rather than individual volumes. Latest anime DVD bought: HETALIA - SEASON ONE.

And for anyone wondering, my avatar is from Junjou Romantica, and my signature is from Bleach.

[ ] Get up to the latest One Piece episodes.

[x] Watch all One Piece movies, including the newest one.

[x] Have my "Life Spent on Anime" guage above 2 months.

So, if want to keep the information posted in your blog, you will need to copy this information someplace else on the site. If you have any questions how or where to do this, please feel free to get back to me, and I will try to assist

Hi there! How are you doing? I'm busy with university work as usual, it seems like i have less and less time for anime. But well, it's life ;-). And at least i still watch some anime. I finished nana not so long ago and I loved it. Have you seen it?

awesome, you're still right on track with one piece :D.

seen anything interesting lately? I've been so busy I can hardly keep up with the currently airing stuff T_T...

Junjou Romantica love!Hi how u doing?I haven't spoken to u in a while sowy! ^W^

Wow so you're getting to the really good part. I'm about only two weeks to being up to date. I like to have a few weeks worth to read or watch. It's my One Piece day.