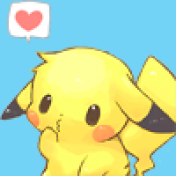 Where do I start? Well, anime has been part of my life since before I hit my teens, and I didn't even know it at the time! Ha ha! I think the first ever anime I had seen was Dragonball or Samurai Pizza Cats...which had to be when I was maybe six or seven years old.

As I grew up, more and more anime worked their way into my heart; Pokémon [Oh yeah, I was certainly in that fad, though is it still a 'fad' if it's something you still adore? xD], Sailor Moon, Dragonball Z, Digimon, Card Captor Sakura, Outlaw Star, Escaflowne, and Yu-Gi-Oh!...all of them lured me into their fabulous stories and root for their characters.

When I entered high school, I finally was around more people to talk about the shows I loved, as well as add more to the ever-growing list. I started reading manga, devouring volume after volume and waiting months for the next one to be out. Needless to say, it was [usually] worth it.

Now-a-days, I try to catch up on shows online, re-watching some that I hadn't seen in over a decade, and slowly expand my list of favorites. Eventually, I'd like to sit down and work on some reviews or recommendations, though that will happen all in good time. :D

I tend to be more into the 'classics', or anime that hasn't been in recent mainstream and had been around for years. Not to say that mainstream isn't good, it's just that (more often than not) something ends up ruining the experience for me when it's been hyped. I also tend to prefer subtiled than dubbed, but that might be because I'm a bit of a 'purist', ha ha.