Guy below saved me from writing it out. What would have been a 100x more amazing anime if it wasnt focused on some spineless airhead. With limited episodes it shouldn't have had romance at all. Ditzy princess vibe kills it. Stalled at the engagement episode.

The entire anime was about horrible and unsatisfying relationships. Anything "positive" you might have gained from it would have come simply from the viewer's revulsion, not the anime itself. 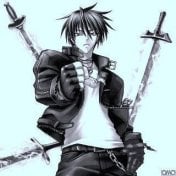 EXACTLY! Like wtf? How cant people see this?  That bitch was self centered ASF!

Sorry it took me so long to respond, I fell under a rock of IRL stuff.

My good friend KiraRin emphasized to me that I should really consider this a fairy tail when I watched it, and I think the assertion holds. The "stranger in a strange land" aspect melds well with the overarching "too-big to really be believable" quest along with the typical themes of lost parents, half-siblings and destiny.

True, the whole thing fits together a little conveniently, and major problems are steamrolled through the power of friendship and fairy dust, but that sort of comes with the territory. I think I wasn't terribly put off by the end, because even if the solutions were silly the conflict was clearly mapped and there was a goal. For me, the opening with it's less-focused approach seemed more confusing.

But, if you liked the more confused and consequently "realistic" approach at the outset, then I can see how the more direct and deus-ex-machina-filled ending would grate.

As far as the animation goes, I actually felt that the shifting strangeness of the style meant that by the end, I'd just assumed everything was deliberate. The characters definitely went through at least three different appearances before settling on the ones they ended the show with. That said, after Dead Leaves, everything looks kinda workmanlike by comparison. ^_^

Thanks for your comment on my Tweeny Witches review!

I see where you're coming from. The show DID get more simple and focused as time went on, but I think the meandering narrative at the beginning only held because the scenery was so awesome. HOWEVER, from where I sit, the nebulous plot of capturing fairies with no greater context paled in comparison to the climactic ending--despite the fairy-tail contrivences. But that's just me.

Where would you have liked to see the series go? I'd be interested to hear.