How does one describe the story of One Piece? One can easily write a description in a single sentence. It's a pirate manga with a crew of goodly pirates who spend their days fighting other pirates, overthrowing corrupt governments, and generally being badass, with plenty comedy and fantastic elements thrown in. However, that fails to truly describe what One Piece is.

One Piece is a heartwarming tale of achievement despite the odds. It is a tale of Luffy daring to dream the impossible, and accomplishing it, again and again. It is an utterly outrageous comedy that will have you laughing every minute. It is an action series that will have you on the edge of your seat with every battle. It is tale of comraderie and friendship that will likely reduce you to tears countless times.

Whether it be the Straw Hats assembling for their latest badass pose, Luffy striking down yet another foe in a way more epic than the last, or Zolo's newest outrageous sword stunt, practically every volume has an epic crowning moment of awesome that will steal your breath away.

As for pacing, often the deathknell of long running shounen- the individual storyarcs all move at a good clip. The overall story is proceeding at a snail's pace - but with each arc better than the last, you won't even notice.

Unlike many other action mangas, it is always easy to tell what is going on in every battle. The comedic art is also very well done, with Oda's goofy art stye the source of countless laughs - whether it be eyes popping two feet out their sockets, or Mr. 2 Bon Clay's preposterously outrageous clothing.

Very well done. Whether it be the incredibly badass trio of Luffy, Zolo, and Robin, the conniving thief Nami, the hilariously naive Chopper, the comedically "chivalrous" pervert Sanji, the speed carpenter Franky, the cowardly liar Usopp, orthe brave and heroic Sniper King, you'll grow to love them all. You'll laugh at their comedic antics and be frustrated by their failures. You'll be enchanted by their unwavering comraderie, and laugh some more at their constant bickering. You'll be inspired by Luffy's boundless courage, and laugh even more at his stupidity. 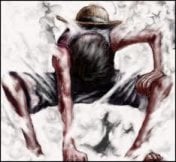 So true it hurts.

"it is always easy to tell what is going on in every battle."

No. No it isn't. Especially during the latter arcs.

I need to catch up on the earlier One Piece volumes, though. Still, definitely not the best manga of all time, in my opinion.