A pretty good short OVA series. I have two different opinions on the story. The overall plot is is just so-so. I did not find it particularly interesting, and it felt rushed. It felt like it was ending just as it finished getting started. For a show based around fighter jets that transform into mechas, there is surprisingly very little action. It was the characters' stories are what made the show interesting. Over the course of the show they gave little hints about the background of the characters, and I just felt like I wanted to know more. The characters were alright. They seemed kind of bland at first, but they really improved throughout the show.

The music was pretty good. It's composed by Yoko Kanno, so it has to be pretty good. Still, this isn't her best work. Wolf's Rain's and Cowboy Bebop's soundtracks were amazing. Overall the Macross Plus soundtrack is good, but nothing memorable.

The animation was good at times, and then it was bad at times. It was kind of inconsistent. The backgrounds always looked good, but sometimes they just screwed up the characters faces. When a character's face was seen at a certain angle it seemed like their nose grew twice it's size. Despite that, it's nothing that would take away from the overall quality of the series.

So, overall it was pretty good. It isn't something I would watch again or purchase. Macross Plus is a good series for a one time viewing. 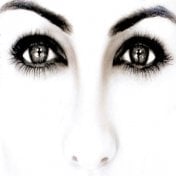