Jun 20, 2012
Read other reviews of Darker than Black: Gemini of the Meteor

When you head into a dark path, your journey may be stained with blood, torment, and despair. It may be very difficult to see a light through the darkness. Once that person finds this light he then will have to decide whether to embrace it or cast it out and sacrifice it, and then... The gate of the soul will open...

Okay, if that didn't make much sense... I did not intend it to... I am making fun of the Next Episode Previews from the show if you haven't noticed already, Here is Darker Than BLACK: Gemini of The Meteor.

I got to admit, I enjoyed the first season of this show and I sort of had some expectations for its second season and I sure have something to say about this season like every other anime, that's why I post reviews here on the first place.

The story goes like this. Two years have passed since Hei and Yin escaped The Syndicate. Making their way into Russia, Hei encounters a young girl named Suo Pavlichenko, whose family has been gradually pulled into the conflict between Contractors and various intelligence faction groups. Meanwhile, Misaki Kirihara has quit her position in the Foreign Affairs to begin her own investigation into Hei, the Contractors and The Syndicate.

The humor sure has improved a bit. Some little moments got a chuckle out of me.

There is one major annoyance from the animation department with this show. It's the repeated scene where Suo's gun appears from her pendant. It worked the first time, but to use it again and again whenever she needs the gun was quite lazy and it sort of annoyed me at times. I have a lot to gripe about this show besides this...

First of all, if you liked any characters beside Kirihara from the first season and haven't seen Gemini of The Meteor yet, you are going to get bitchslapped. I just want to give a spoiler alert before you continue on...You have been warned... how this show treated its characters really pissed me off. If you liked Hei, say goodbye to his Chinese electric Batman moments early on in Gemini of The Meteor. If you liked Yin. She doesn't appear that much until the last two episodes... If you liked Mao, Say goodbye to his cat appearance, the new character Suo is treated as a main character in this season and the story is about her and what she's going through. There are some minor characters that I guess were interesting and some were pretty cool, especially Mina Hazuki, she’s a katana wielding chick that kicks ass. Her katana looks "Lightsaber"-ish, don't you think? If it is... The force is strong with her indeed...

The soundtrack has a bit of a different tone than the first season, the soundtrack isn't too bad but it can be a bit forgettable at times. If you haven't noticed the credits in the opening or if you do not know this at all. Yoko Kanno did not compose the music for Gemini of The Meteor, the one taking her place is Yasushi Ishii... Don't know him; if you are familiar with the TV show Hellsing, he composed the opening of that show. According to some sources. This is his first composition for a TV anime. The use of Beethoven's Moonlight Sonata was a nice touch and of course with vocals as well in the song... But I don't have a lot to say about the soundtrack; there were about 3 songs I thought were good.

The voice acting on both sides is good. The Subtitled Version and Dubbed Version are just as good as the first season. You can't go wrong on either version. Although to be fair, some cast choices in the dub could have been slightly better but I didn't mind too much of the dub. I thought Sonny Strait as Suo's Father sounded a bit under aged. Still Zach Bolton's ADR directing does not disappoint greatly

If there is one big disappointment. It is the story itself. There were some questions from Season one that sort of never gets answered. Season One had a number of subplots going on and it seems that the story is telling the viewer too many things put into 25 episodes, Gemini of The Meteor is one continuing story about that girl Suo. I don't mind the change of how the story is told. But the length of this show is a bit too short and The Last episode was a disappointment. If there is one thing that Bones should have did in the first place, it would be that they should release the OVA's BEFORE GEMINI OF THE METEOR. I AM NOT KIDDING, The OVA Prequel to Gemini of the Meteor explains on WHAT THE HELL HAPPENED TO HEI AND YIN BEFORE THE SECOND SEASON! I was really puzzled as to why it was released the way it was before. There are some things I did not like about Gemini of The Meteor. When Hei loses his powers, it was a bit early for that to happen, his hobo-drunk personality was an interesting change, but it is somewhat forced to show that he is depressed. Mao's sudden change to appear as a flying squirrel since his cat form was killed, Seriously, WHY!? I liked him as a cat. Yin being "Izanami" I guess fits but is explained in the OVA. If you haven't seen Gemini of The Meteor yet, I absolutely recommend watching the OVA first even though it was made after the Second Season and thus making it a prequel to Gemini of The Meteor. It will make watching Season Two less confusing and more easy to follow. The character development still is shot to hell; the treatment of these characters is depressing WAY TOO QUICKLY. Of all the characters, Suo is a far more interesting Contractor than Hei, and Hei was the main character. I really am disappointed on the presentation in the story and this season could have been so much better too... It is such a shame that Tensai Okamura who was known for directing Wolf's Rain to go this low in changing a lot of things in Darker than BLACK. If I really have to say which show is the weakest he's directed. It is Darker than BLACK: Gemini of the Meteor.

Darker Than BLACK: Gemini of The Meteor is available by Funimation.

With That Said, Darker than BLACK has better action scenes than the first season, but the character development and treatment is shot to hell. The music is okay and the animation is still good. The Story for Gemini of The Meteor does not meet expectations at all. This sequel will most likely disappoint you. If you are willing to distance your disbelief, you might enjoy this. This is a disappointing sequel to a series that had some cool ideas.

Feel free to comment below and shoot for the stars 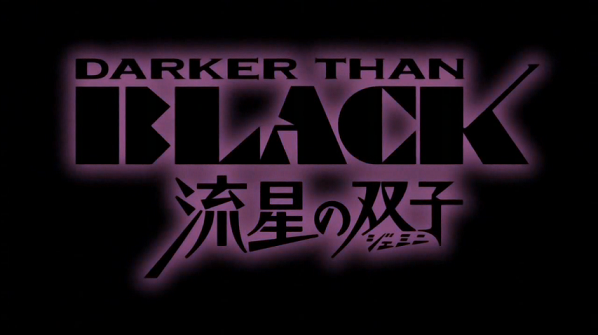