Nov 4, 2011
Read other reviews of Boys Over Flowers

Story: Putting it simply, the story of HanDan is very simple and just like every other romantic shoujo comedy out there- but theres a reason why they are a all like this: Because HanDan managed to pull it off with such success that the others all followed suit. From the first episode of the series, I could tell it would be an emotional, magical story what would pull me in and amaze me, and it did. Easily my second favourite anime of all time (It would be first, if not for the fact that Digimon was my first ever anime hence my top favourite) Hana Yori Dango boasts great characters, great gradual storyline-what may have sometimes dragged- but was still pure genius, and superb at everything.

Animation: I'd wanted to watch this series for a long time, but the art style had put me off as it really wasn't to my tastes and since the show was older than I was I immediately presumed I wouldn't become much of a fan of this show anyway-how wrong I was. Within about 3 or 4 episodes I was used to the animation and old style of it, and by about episode 15 I was in LOVE with the animation- I wish there were more shows with that style of animation in fact. It could be a little slobby at times, but in general it was very good and got better as the episodes progressed.

Sound: Sad to say, music isn't the strong point of this particular anime, but hey, we don't watch anime for the music after all. The opening sequence I ALWAYS skipped as soon as I got to episode 2 or 3- I just HATED it. It sounded like it was from the 60s and was horribly outdated and cheesy. The music in the actual show was sweet and mostly instrumental with piano and violin accompaniments. They were VERY repetitive to the extent that you knew each song almost off-by-heart but they sounded good and suited the overall mood of the anime, so I can't complain.

Characters: Characters are what make this show sparkle; their all superbly etched out, their individual personalites made clear from minute one, and you end up loving them all from minute one. The love triangle between Tsukushi, Tsukasa and Rui is one of the most memorable ones in history and the greatness of it is that its never clear exactly whom Tsukushi will end up with, not like most Shoujo's where its blindingly obvious and you know exactly how it will end.

Overall: Easily the best Shoujo I've ever watched or read, this is a must-watch, regardless of its age and old animation. 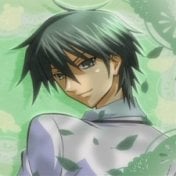 i feel the same way about the animation and such. i've also been putting it off cuz this anime is old but now i guess ill try it out cuz of what you said. Thanks! :D