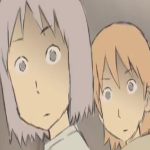 Usually, people tend to like the first anime series they've watched a lot, and I mean A LOT. Higurashi was one of the first series I watched, I loved it. It was intense, mysterious, bloody and just plain awesome. The first season was a bit confusing, but Kai came and closed the story. So everyone wins and everyone's happy, woo hoo.

But then came the OVA.

Here's a rundown, there are 5 episodes, but only three of them are worth your time. Episodes 2, 3 and 4 are what Higurashi is loved for. It's full of suspense and mystery and it's got Rika in it. But while the creators did a good job with these 3 episodes, it still doesn't escape the fact that 1 and 5 suck.

A lot of anime series tend to have a lot of fanservice, and that's all you're getting with episode 1. Fanservice with a side dish of extremely awkward and unfunny comedy. It even tries to make a story out of it, that's the only funny part of it. So Keiichi puts on a bathing suit that will make him a narcissist? Good game, Rei, good game.

See, if Rei decided to stop after episode 4, it would have done a bit better, but it made the ultimate mistake of deciding to milk out one more episode.

When considering sound, though, it's not that bad. It starts with a catchy OP and ends with a melancholic ED. The seiyuu did a good job with voicing their respective characters. And that's another thing I like about Higurashi, the OPs, EDs, and the seiyuu.

So, to wrap this up, the creators did a great job with the main arc of this OVA, but unfortunately, episodes 1 and 5 kept me from loving it a bit more. If you haven't watched this yet and really want to, I would recommend watching episodes 2, 3 and 4, as 1 and 5 have nothing to do with its story.