Note: If I like a dub better than the sub or vice versa then it's the higher rating that I give on this site.

Anime went downhill at 2008 or so (the most recent anime I like is the first season of Haganai (the original Japanese, not the crappy English dub) and that came out in 2011), I've seen all of the good anime, I hate a good bit more anime than I like, anime that I watched because of their popularity usually turned out to be mediocre while ones that are widely reviled usually were deserving of their reputation, some anti-religion anime didn't help either (cough Masamune Shirow and Yugo The Negotiator), sonce 2008 there's been sequel after reboot after prequel which reminds me of the line about "If you've missed it the first time now's your chance to miss it again" and I've realised that most anime is mediocre and the anime community in general is terrible what with all of the tribalism, stupidity and moonbats in it.

I'm Sioraf as Na Cillini. SANC was taken so I picked SANC16 after the Easter Rising (now renamed myself to European Qoheleth since I haven't been a patriot in years and feel more European than Irish and Ecclesiastes, written by Qoheleth, is my favourite book).

I realised years ago that the quality (or lack thereof) of almost every anime will be the same in one episode as another and so if you've seen one episode of a particular anime you've seen all of them in that regard and the same goes with  chapter of manga and so not everything that I have marked as watched or read has been watched or read to the end but I saw that I was going to find it OK or bad no matter how long I watched them so I gave up. Death Note manga has also been marked as read since it's almost entirely the same as the anime although I did read a fair bit of it. This may sound dismissive but it really has been my experience having gone through literally hundreds of anime. Because anime are watched far quicker than they're produced I've scoured every anime listed on this site to find as many to watch as possible. I firmly believe that characters must be judged based on their personality and actions and not looks. As with life as a whole the fanatical, idiotic, dogmatic fanpeople mobs annoy me as much as the condescending, pretentious, rude snobs (and their deluded, vicious attack dogs) as really both just go about ruining things for everyone in a different way. This being the internet and everyone being super angry and negative about everything for some reason to avoid yet another flame war over animated shows (animation is SERIOUS BUSINESS) I'm not going to read any comments whether on my profile or reviews. My sympathy goes out to those who do have something logical and worthwhile to contribute. I've lost interest in commenting myself because you can roar at a brick wall all you like but no matter how long you stay at it it will still be as thick and inflexible. I consider anime worth watching if I have rated it 3.5 or higher and with the vast majority that I have seen being not worth watching and the sheer meanness and stupidity of a number of fanbases plus the fact that like seemingly anything popular on the internet the anime fanbase is infested by postmodernists always putting right, good, wrong, real, true and God in quotation marks and moonbats I stopped calling myself an anime fan in 2013, the most recent anime I like is from 2011 after all. I was thrown off by the V4 design at first but I like it nowadays, the old design was fine but looked like it was from the early 2000's which it probably was. This new design looks current, possibly even futurisitc. I'm upset that roriconfan wasn't banned entirely as he has done utter wreck to this site and has been hypocritical and nasty on YouTube, outright baiting people and constantly bringing up his fanatical atheism and irrational hatred of Code Geass into his videos. The fact that someone like him has any fans at all is a sad reflection on the anime community.

A tiny number of anime that I've marked as won't watch are ones I couldn't find but wanted to watch.

Your life on anime if you watched everything: http://www.anime-planet.com/users/Everythingwatched 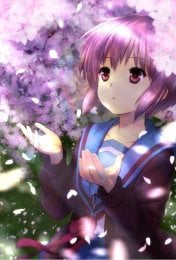 You hate yoko kanno? Here, have a hug, looks like you need it.

Eh there should be some not so popular gems out there.

Oh cool you saw my tumblr! What's ur tumblr name? And yay another gray ace