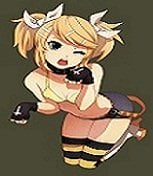 i like almost all sorts of anime and have been trying to get around to manga haha... im a guy... who likes video game rpgs, anime, music, and hanging out i usually try to watch stuff my friends have watched xP im very easy going. been meaning to read more manga but i never get into it as easilly as i get into anime. but i like to claim the title of otaku haha though i dont brag about it cause i don't want to be a weeaboo. i do play a lot of video games or rather i have xDD which has lead me to certain anime's heh my most notable anime's would have to be (in no particular order)

anyway I'd be happy to make any friends if i can i like meeting new people every once in awhile x3 and as for personal info im 23 and male xP any more info youll have to ask.

hey Chikane, shall we be friends?^^