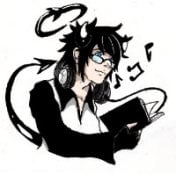 I suppose I should start up with an intro. I've been watching anime since I was very young.

Starting when I was a wee lad, I would watch some on television, but then I made friends with some older, more experienced anime fanatics. They were quite cultured in Japanese culture and anime as a whole, so I became emersed in the world that is Japanese animation.

Over my 19 (almost 20) years of life, my list grew. Thus far, my favorite anime has been Cowboy Bebop, Rurouni Kenshin being a VERY close second. My earliest memory of anime watching was Speed Racer, Lupin III, Pokemon, Dragonball, Sailor Moon, Cardcaptor Sakura and other such titles. With such a wide variety at a young age, it's pretty simple to see how I could watch so many animes of different kinds.

Over my years, I've met almost as many anime fans I have seen animes. It's quite a pleasing life that I wish to share with others. I figure, that'd make me out to be an expert, of sorts.

I'm curious: what would you say is your favorite anime character of all time?