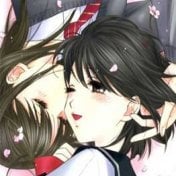 My name is Catarina and I'm from Portugal!! Here, where I live, there isn't too much manga in stores nor too much anime airing on TV but I do my best to keep up with the trends!!! I wish I could do better, but my life sometimes can be quite time consuming... which sucks!!! (x_x)

I’m starting University this year and my schedule really really sucks! I have almost no time to breathe in the first semester! I hope I can still watch as much anime as I want to. Thankfully, it gets lighter in the second semester so there’s still hope! (^_^)

I have always dreamt of learning how to play the guitar, therefore I bought one, books and guitar related stuff about a year ago... Guess what, I still don't know how to play one single song (x_x) The guitar's in my bedroom getting dusty. It's probably all rusty now, or something (can guitars get rusty?) At some point in my life I hope I get someone to teach me how to play it...

I love to travel and be in touch with new cultures! I hope I get to visit Japan someday (oh another manga & anime fan who wants to go to Japan, that's not something you see every day...), specially Kyoto (I've had a thing for Kyoto since I was a child, don't ask me why because even I don't know)

Oh yea, this I'm having Japanese classes! It's really exciting, but a bit scared, at the same time lol

I don't know which one I prefer: manga or anime... It's a hard question, you know? Sometimes I'm more into manga other times I'm more into anime. But I usually read the manga at the same time I´m watching the anime, if I see it might be worth it (most of the time is).

I have a cat! She’s beautiful white cat, with green eyes and a little silver spot in the back of her head. She's so PWETTY!! (>_<) Her name's Yuki and she's my baby lol Seriously, I can't live without her, even though she's only been with me for a few months...

I also love coffee, ice cream (if it's coconut ice cream then I'm in heaven), dark chocolate, petit gateux and the best dessert in the world "Baba de Camelo" (it's a Portuguese dessert and if you translate it literally to English it will be: Camel's drool - I know it sounds disgusting, but I'm telling you it's DELICIOUS!)

Other things that I love are my iPod and listening to it, sleep, go out at night, cinema, theater, reading, table tennis, the zoo, twitter (it's so damn addicting), Spring, TV shows (like grey's anatomy, house, the L word, supernatural etc etc) and my friends!! - There are more stuff but those are the ones I can think of atm.

I LOVE ANIME AND MANGA, OBVIOUSLY!

Feel free to drop by anytime, I don't bite! x3

Do people read the bio?

Hallo!  Sothis, the site's creator, is redesigning the anime-planet site, and plans to roll out an awesome new site design in July, we believe. The blog feature is not part of the new design, and it is going away.  More information about this here:  Announcement: the blog feature is being deprecated topic link. Be sure to check out the new site design when it comes up!

So, if want to keep the information posted in your blog, you will need to copy this information someplace else on the site or someplace not connected to the site; such as an external blog. If you have any questions how or where to do this, please feel free to ask me, and I will try to assist.

Yeah, I know... University can be troublesome. Essays, oral tests, exams... I'm having a rough time here too... I spend most of my time per day there for crying out loud...!

I remember the good ol' times when I used to watch 15 episodes a day. It was such a nice era...

I think you should start playing again. Just grab it once more and release the music. Close your eyes, focus your thoughts on things you like doing, listen to the sounds all around. Then, just let the rythm guide you... It's almost positive that your first try won't be a successful one, but don't be disappointed. One step after another, you'll eventually get it. And after that, well, there's no stopping... :)

It's remarkable how much more relaxed I feel when I'm doing that. After a long tiresome day at school, I sit on my bed at night and just play some tunes. After that I feel great, like all the stress of the day has been miraculously lifted off my shoulders...

One year old guitar is not long. If you take it to a professional, he'll make it look brand new! It's going to cost a bit though... :)

Bingo! The correct answer is indeed Greece! :) (obviously it wasn't much of a riddle since you figured it out that easily.. Or maybe I gave away too much.. Who knows... :p)

That was one hell of a summer for us. The Olympics, the first football Cup ever won in our history... Oh yeah...

But enough of the past. As I was reading your bio I happened to see that you play the guitar... As you can most certainly guess from the previous sentence, I do too! I started 3 something years ago and I still love it (although I kind of put on hold this activity since I entered the university... :\).

PS: Someone's probably already answered that question of yours but I'm too bored to check all the previous messages on your profile. Guitars can't get rusty; the chords though eventually do. Furthermore, acoustic and classic guitars need to get a service after some time since they're made wholly of wood. (if not, the sound changes; and not to the best)

Heeeyy! Greetings from a country a bit to the south and a lot to the east of Portugal..  Since you probably can't tell which I'll give you a hint. It was the fourth of July of 2004 at a filled with excited people Estádio do Dragão...

Nice lists by the way...