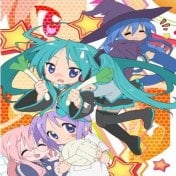 Giant Killing was a show that I had high hopes for that in the end just couldn't deliver. The premise of the show managed to be both worn out and new at the same time. You have a lack luster sports team that is struggling to stay afloat and a new coach comes with lofty goals and a plan to turn things around through strategy. I've seen this played out in western media a lot but this is the first time I had seen it in an anime.

The story for this show had a lot of potential but in the end had some major flaws. I thought the idea of changing the team through strategy to be an interesting change but in the end you only really see it done in three games. The rest of the show he just leaves the team to fend for them selves in painfully hard to watch episodes. Also the pacing of the series was rather poor as they would blaze through multiple games an episode and then spend 4 episodes on one game. The luls in between the games that matter leave you rather board.

The art style of the show was rather unique and was refreshing but the quality of the animation was rather poor. If would be smooth on more important episodes and jerky one others. There as also the occasional use of horrible CG.

I liked the music used in the series as i thought it fit the mood well, but there were some voices that were a little grating.

Giant Killing is a refreshing change for any sports anime fan that is light and enjoyable. You get a semi-satisfactory ending but a lot still feels unresolved. It could really benefit from a second season but i don't see that happening. For a non-sports anime fan or a non-soccer fan i would advise you to stay away from this one as you can easily find something better.