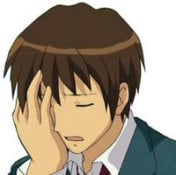 This was quite an unexceptional anime.  The most egregious issue is of course the animation...the only good thing I can say about it is that I generally found the character designs to be palatable.  Apart from that though, there really isn't anything good to say.  Aside from generally terrible movement, the worst thing was that they added in shots where the angle gets flipped 90 degrees.  I couldn't even begin to guess what the reason for this was aside from either laziness or stupidity.  But it was very distracting.

I'll preface this next part by saying that imouto anime isn't really my go to genre, but I'll try not to let my personal tastes reflect on my review of the story too much.  In general though I thought it was entertaining enough to at least hold my attention.  And while I don't have much interest in imouto's, I do appreciate moe anime.  And this is definitely that.

Some of the situations and characters are a bit too on the nose with their tropeness though, and I found there to be too many members of the "harem" for such a short series of only 10 episodes to date.  In fact the very first girl you get introduced to is an "old loli" archetype character who only really shows up in the very beginning and the very end of the series.  So characters just end up feeling like they're thrown into the mix haphazardly to check a trope box here and there.

At the end of the day though, I did manage to eke some enjoyment out of it despite all of its incredibly apparent flaws.  While at it's heart it's a derivative mess of moe cliche's that takes a great deal of inspiration from far better series, it also sets itself apart in equal measures.  Enough so that it's actually kind of entertaining and watchable.