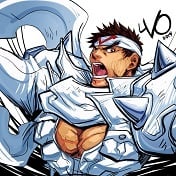 People gave a name to something what is just a system, and after some time ended up believing it's an entity. God was just given that name, he only tries put others into the story he's seen in his delusions. And then people, fascinated by the bliss of the world where the God stands on the top, end up killing each other and waging wars. If it's so, then I... I will kill the god and make everyone know that his story was doomed to fail!

But how do I show u?

Also, if it's not too bold, may I ask what you do for work?

*blushes* I can't garuntee the quality....

What is light without darkness? What is day without night? What is good without the chance to be evil?