hey hey i just came back from the hell that is my mind, sorry for not replying to everyone sooner! hope everyone's fine

Your welcome and thank you for the followe. How was your day!?

Oh I watched "Cherry Magic" too ^-^ It isn't among my favourite BL dramas but I appreciated it and I liked the fact that it avoids some typical stereotypes of Japanese BLs :) It's also really cute and nice and both the main characters are likeable... I really like when there is a gentle and kind love interest for the main character, I can't really enjoy it when in a romance one of the character behaves like a jerk ^-^" About "Together With Me" I heard of it since it's probably one of the most famous Thai BLs but I never watched it because one of my friends said that it has a lot of unhealthy and problematic situations/interactions and I really trust her judgement since we have really similar tastes... I don't know if you perceived it the same way, I'd like to hear your opinion about it if you'd like :) About "Word of Honor" yes, I think that you can enjoy it a lot even though you are new to dramas... In particular if you want to start approaching Chinese dramas, "Word of Honor" and "The Untamed" are, in my opinion, the best choices ^-^ I'm really enjoying "Word of Honor" btw, it becomes better and better with every episode, everything it's perfect <3 Also, I'm amazed because of how "explicit" the relationship between the main leads is considering the Chinese censorship... They kinda closed eyes and ears for this series ahah xD

For me, it's not like I haven't told anyone I'm asexual, there are few people who knows about it but I don't plan on coming out nor on hiding it... I don't have problems in saying it if I'm in a situation where people ask me about it and I have always talked about it casually and normally, like it's no big deal xD Of course, it's not like I randomly talk about it without the right context but if the situation is appropriate sometimes I just mention it... I don't know, I don't feel like it's a big part of myself, it's just an aspect of who I am... but, of course, I understand that it can be different for other people and that it's not like we all have the same approach to things... Since it's someting personal, it's perfectly right to have different feelings about it and to live it in different ways ^-^

I understand you when you say that asexuality is not a textbook. For me too, is more complex then what other people often think... Human sexuality is really complex and is different for everyone, it's not like there are rules and you just follow them xD Some people can be asexual in a way and other people in a completely different way... I think that sometimes it's difficult to explain something so complex and personal to others... For me, it's difficult to explain to other people the fact I don't experience sexual attraction but that I do want a romantic relationship and I also experience aesthetic/physical attraction and also that not experiencing sexual desire doesn't mean that I'll never be phisically intimate with another person... I don't feel the need nor the desire to be phisically intimate with someone but it could be possibile with someone I love... I don't know, I think that most people just think that all this things are contradictory but for me they make perfect sense xD But I suppose that it's always difficult to understand something you don't experience yourself xD

Argh, my relatives are also that stereotyped ^-^" I'm sorry that your relatives too always ask questions about marriage/boyfriends to you and your sister... For me, it's the same, they always ask me about boyfriends and such (they also take for granted that I like - only - boys, which is true, but it's not like only because I'm a girl then I automatically like boys... But they don't even consider this possibility ^-^"), but it's not like my happiness depends on another person... I think that society sprend a dangerous message: that people are just halves and that they need another half to be happy and complete but people are already complete, you can be happy with another person but you don't need another person to be happy, in my opinion :)

About being happy single, I definitely think that it's not something only asexual/aromantic people feel... I know a lot of people who are perfectly happy on their own regardless of their sexual orientation xD

Yes!! More people into mXTX always makes me so happy!! Also yes, anything supernatural and has action is such a guilty pleasure for me too. But sometimes it depends on world building, characters and the story/plot in general but I won't go to deep into it!! But yes, supernatural things are so welcoming! MXTX is just that speical, i got a whole folder of it and some good memes too. I can send some too :D 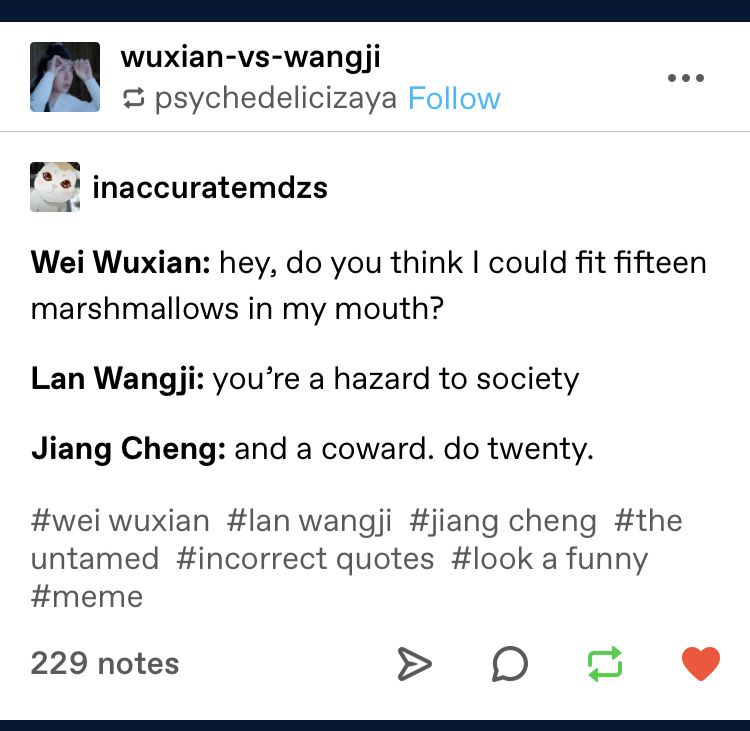 I take it back, these type of memes are my down right favorite and I just have so many

Yeah, it was more hard on my mom though, but thankfully she's better about it too. One thing that sucks about it was one of them was only in their 30's...
(I mean, I'm "late" too, since it's taken me hours to respond, so it's fine lmao. x'D ) o: Good luck with the school work. o_o

Well, I recently got inspired to write again, so I've been working on an Autobiography of my life thus far. ^^ A new friend (who is also a writer) has been helping me work on my Fantasy novels, so that's been exciting. Other than that, I've just been gaming and watching anime. xD Oh, I also found an interesting K-Drama that I've been watching recently. It's called Navillera. I'm only 2 episodes in so far, but it's basically about an elderly gentleman that as a child, wanted to do Ballet, but his abusive father wouldn't let him. Somehow his story entwines with a 20 - something year old Ballet dancer. (I suck at explaining plots, so while my description makes it sound like a comedy, it's actually not. Yeah, there's some funny parts here and there, but from what I've seen so far, it's mostly serious.)

Ha, I'm the same way. xD I have such a backlog of stuff that I want to watch, but it's hard choosing just one.