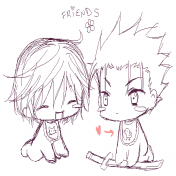 I'm a fujoshi since I've born. Why? My father EVER put me in his knees when I was a beutiful and inocent baby -aja, it's valid be a dreamer- to see Saint Seiya. Maybe this is the reason for why am a girl who likes yaoi.

In this time my mom put me in front of the TV to watch Sailor Moon and Candy Candy. And when I was 3 I watched The secret garden -anime-, Hello! Sandybelle -anime and Heidi -anime-. I like the flinstones and Tom and Jerry, too, but this series liked me more than the Hanna-Barbera productions.

I grew up and I left the anime for series like ginger, KND... and I go to the school and I learn to read and I became a rat of librery.

When I was 12 I met the Teen Titans and it was the begin for the Hell.... excuse me, to the wonderful freak world. I enter to the Middle school -the secondary, in mexico- and I begin to do a fanfiction. In the summer a friend tell me to watch Naruto and I put one floor down to the hell...OK, I won't call hell my hobbie, I will call the frikiverse, it's a joke, people. We both did a parody with other anime series like Tsubasa Reservoir, Death Note, Naruto and Kim Posible, The fairly Goodparents... In the autumm when I went to a library I saw a magazine called Shojo and I recognized that I like the draws and I recognized one or two series. I decided to watch TRC and CardCaptor Sakura for a friend.

At the 14 years I go to a comic and manga con and I was really happy. I was flirting with a cosplayer of Deidara, but maybe my father looked at him in a not good way. Since this time I called me a otaku girl. I like the yaoi since 2 months.... I buyed a CCS manga with Touya and Yukito in the front and I screamed "Kyawaiii!!!". This was the begin for other floor up in the frikiverse. Now I watch my classmates and I imagine a yaoi scenes. Isn't  my fault that they be a little bit gay.

Well, this is my crazy history of life. 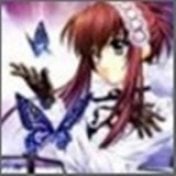 nice info its long and interesting i like it kazihiko how  about you ?