Yet another Killing Stalking clone that I just could not get into!  In this "story", we have yet another pathetic, cowardly, socially disadvantaged and physically weak "uke" who is consistantly brutalized (mentally, physically and sexually) in the dark, brooding home of a sadistic, much more physically developed and socially upward "seme" and for no other apparent reason than that he simply hates some physical, social or psychological aspect of his victim(s).  The narrative moves along at a tear inducingly slow pace yet, at the same time, manages to get nowhere fast.  The characters themselves are basically just pale carbon copies of Sangwoo and Yoon Bum lacking any of the charm or depth of either one.  Lucaon and Kyon are essentially just the yin and yang of each other, being on either the black or white areas of the sectrum thereby lacking the very large gray area that gives Sangwoo and Yoon Bum their depth, development and growth.  The sexual scenes, while very graphic, are quickly forgettable lacking the shock value and range of emotions of those between Sangwoo and Yoon Bum.  The art is o.k. but very inconsistent.  In some scenes, the characters are highly rendered and pristine whereas in others, they appear "sketchy" and unfinished.  I really tried to give this one a fair shot having read 10 or more chapters but, alas, it's just too grueling!  The plot takes entirely too long to reach any semblance of a point or purpose.  This title will need much more than its attractive characters, gratuitous sex scenes and similarity to another well liked narrative to carry itself. 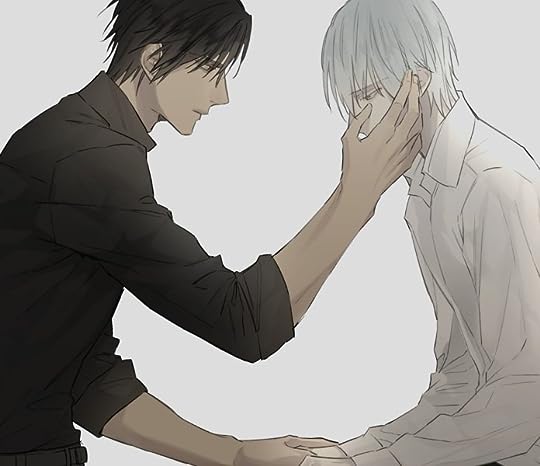