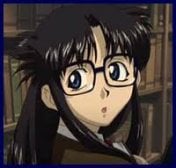 mmm...  let's see...  i started to become aware of anime because of ranma 1/2 (so this is my first favorite), which was on tv when i was young.  i started watching again with shows that were also on tv before, and then i saw those kawaii puppy ears that inuyasha has, and i got hooked.  XD

right now, i have lots of favorite animes but i'm more into being a fan of the characters.  inuyasha and sesshoumaru (and inu no taishou!), tsukiyomi ikuto (my username is kind of ikuto's email addy in the manga...), van fanel (draconian version!), wolfram von bielefeld and conrad weller, rene tamaki richard grantenue (otherwise known as tamaki suoh), hitsugaya toushirou, and tsuruga ren, among others (wow, how fickle!).  can you guess which anime they're from?

it's also fun reading fanfiction about your favorite pairings, ne?

about the only other thing that i like aside from anime is the harry potter series...

ah, that avatar?  someone said i look like yomiko readman.  ;-)

Really?  I didn't know that.  I stopped watching Bleach episodes when the fillers came out.  But it was thanks to June that I found Bleach.  This Quincy Arc is said to be the final arc..

Wakatta.  :)  The phone cover would be none other than Archer and Tohsaka Rin.

Ahhhh...  Kawaii signature!  :)  Btw, why are you sending your messages through the comment thingy and not through your anime-brat email thingy?  Anyways, I wanted to show you my new phone cover but i think you already have an idea what it is...

uhmmm...  what signature are talking about?  the disney one?  honto ne?  guilty crown is finished?  its been a while since i last watched anime'.  i've been stuck with school and catch up with bits of manga...  i can't even play Fallout: New Vegas anymore...