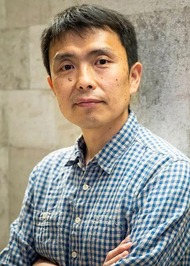 Daisuke IGARASHI is best known for being the author & artist of Soratobi Tamashii, Hanashippanashi, Little Forest, Witches, and Children of the Sea.

Such a stunning mangaka. His works have a unique feeling and style - he mixes mystery, mythology, occult, love of nature with longing for something deeper, beyond human grasp. It took me a while to truly appreciate him, but I'm really amazed by his works now. It's also really cool how he's able to draw the reader in what he's into, let him look through his eyes. I mean, I, regretably, can't really appreciate the nature when I'm surrounded by it and I'm not really an outdoorsy person, but he makes me want to go outside, do things, appreciate the nature. I really like the way he presents the natural environment.

And his mystical occult style where everything is hidden and uncertain and there's a deeper understanding of things is also amazing. Makes me wish there really would be something like this in the world. Though it's also a bit creepy in Igarashi's works, like there's some knowledge humans shouldn't uncover. But maybe not totally, there's some access to the mysteries.

Also, obviously, breathtaking artwork, really makes you stop to appreciate it and draws you in. You can instantly tell it's him who draws the manga. Such a unique atmoshere.