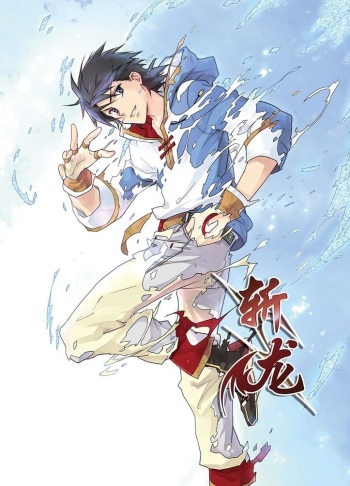 Welcome to a virtual underground game with no protection, full of lurking players who seek survival, power, and fortune. Kieran chose to enter this VRMMORPG game without hesitation, because he knew this was the only way for him to escape death’s grasp. Can he escape death in real life though, or will he end up dying inside the game?

Kim Jee-Ha comes from a good background with decent grades and test results; however, he has one big flaw – when it comes to official events like university interviews for example, he is horrible. To overcome his social awkwardness, he embarks upon the virtual reality game Trikia where he meets an eccentric high level undead Nine – his future guild master.

In the early days of the virtual reality game, Arena, meleegod was the strongest ranked player! He deleted his character and suddenly left. In order to restore his bankrupt family, he returned to Arena! "Do you want to create a character?"

The Boss Behind The Game (Novel)

Lu Wu, an aimless video game developer, had been feeling perturbed ever since he found out he was the direct descendant of a king from the underworld. Other than the title, His Excellency, his ancestor hadn't passed down anything else to him. On top of that, all of his ancestor’s subordinates had rebelled against him and completely usurped his inherited territory. Under the circumstances, Lu Wu built a battle game server with the help of his new mysterious friend and transported gamers from the real world straight to the underworld using virtual reality. They then created the main quest, the character classes, the Instance Dungeon, the storyline, and the non-player characters for the game. Relying solely on these video gamers’ strengths, Lu Wu began his expedition to reclaim his rightful inheritance. What could possibly go wrong?

Battle Emperor Fu Sheng is the most popular player in the game, The New Age. Everyone believes that only he will become the champion in the final battle! His real name—Lin Jie. The reason for his participation in the battle is to win the Capsule of Revitalization for his injured mother and sister. With the Broken Blade, a Heritage weapon, in hand, he finally makes it to the final battle! Only then does he realize that his best friend had betrayed him! After his devastating defeat, Lin Jie is shocked to realize that he had time-travelled all the way back to a few years ago when the beta version of The New Age was just about to launch! With all my knowledge of the game... Pros on the leaderboard? All of them my underlings! First kill of a BOSS? Mine! First clear of the exclusive dungeon? Still mine!

I missed the game helmet and dropped a golden finger! Su Bai has an extra progress bar that no one can see, and he can create a bug every 10 hours! For the first BUG, ​​Su Bai entered the game more than ten hours ahead of the global players! After all the players enter the game, Su Bai has reached the upper limit of the Novice Village level and is still fully equipped! Just in time, the time is up, and we can create BUG again! This time, Su Baika entered the village chief’s house. Because there was something in it that made Su Bai very concerned. Emmmmm… Su Bai never expected that when this card entered, he was actually given by a goddess…