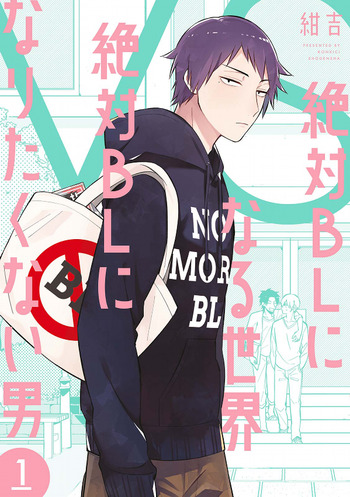 Kusuo Saiki is a sixteen-year-old high-school student with innate supernatural powers. What are his hassles and troubles triggered by his extraordinary ability? And what misfortunes fall upon him?

MC lives in an absurd world filled with tropes and tries to avoid them at all costs! also are great comedies!

The main character is an unfortunate, monotonous guy who wants nothing more than to live a calm, normal life as a background character.

A comedy following a protagonist who is trying desperately to avoid being dragged into the plots of those around them.

Saotome family also known as the family full of fudanshi. From the single dad to his two sons, BL runs in their blood.

Fudanshi Kazoku is about a story of a family full of fudanshi's.

A woman manager in a company filled with all the yaoi clichés. All her coworkers are men, gay and very incompetent, most likely because they are more concerned about their "secret" dating. Only her superior that looks like a broom with glasses seems not to be involved with anyone and keeps yelling at her for any little thing.

Both are aware that they live in a 'BL world' (or in Manager Yeo's case, a BL workplace)

Both have a comedic tone

Reincarnated from a Fujoshi to the protagonist’s younger brother in a BL game!! I was going to watch and protect my big brother, but instead I was promoted to be the main character!? A working adult Fujoshi reincarnated as the main character’s "younger brother" in the world of a BL game she played in her previous life. ‘It seems that my brother has already been tied to one of the capture targets... And to be able to see what happens after the ending, such as the afterward stories of my favorite couple, and how the broken-hearted capture targets will recover from now on… really, this position is just too delicious for me!! But when I was playing the game, I didn't see any "younger brother" though!?

They both are characters in a bl related world, both whitty, and comedic and overall a comedic relief.

My first impression of Ryuuga was “This is the kind of protagonist you’d see in something like an anime.” That thought soon changed into conviction. First of all, this guy almost never talks about his past. Also, he frequently slips out of class. As soon as he comes back, he gets extremely tired, blood comes out from his lips, the sleeves and cuffs of his uniform get torn, and so forth. Furthermore, there’s always beauties that are surrounding Ryuuga. It’s very tiring for me when these people appear in front of Ryuuga. I have to frantically make a fuss by saying things like “H-hey Ryuga! How did you get acquainted with Yukimiya!” So why am I doing this? That’s because I, Kobayashi Ichirou, am a pro at being a friend. My life’s calling is to support Hinomori Ryuuga, the protagonist amongst protagonists, as a close friend character.

Similar vibe in my opinion. Both have a protagonist that percieves the world as being a manga, or more like, multiple mangas. Whilst one focuses on a protag that observes the world and tries to stay a mob to prevent turning into a BL ml, the other focuses on a guy who wants to be a side character and fully dedicates himself to the role with his acting skills. I like the humour, they're both funny (although I prefer the BL one more, but that's just my personal taste).

An otaku named Otogawa dies in an unfortunate accident and reincarnates into a world of boys love as a handsome man. Though he loves big-breasted women, he is now instead in a world where he will be crushed by muscular manboobs.

Although the main characters' personalities are very different, both are about men trapped in a BL world trying to escape the BL