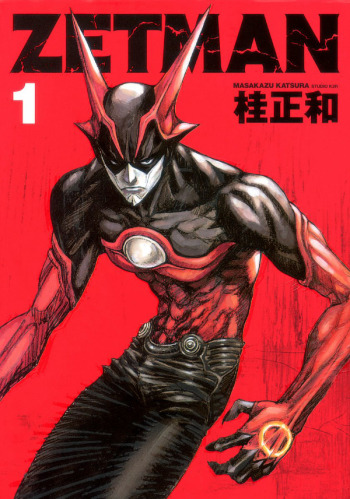 Zetman is about Justice.

But what is impressive about Zetman is the way it chooses two characters, completely different from each other, puts them side by side and lets us see how their ideas of justice are similar and different. They have the same goals, but what is most precious to them, what they decide to sacrifice to achieve their
goals are very different.

Jin is a superhuman known as Zet. From a young age, he has discovered the hardships of life as he loses many people who are very precious to him. Through these incidents, he becomes sort of a cold person who likes topretend he doesn’t care about anything but inside doesn’t want to lose anyone anymore. To do this, he tries to keep distance from the people he cares about. He believes that the people closest to him are most important and that saving someone’s life is always right, even if the person doesn’t want to be saved. He didn’t want to become a hero but because of Zet, he realizes that he must or the people close to him will always be in danger.

Kouga on the other hand is a rich and quite spoiled boy who dreams of becoming a superhero. His friends have built him a suit that gives him more or less superhuman abilities. He doesn’t actually question what justice is to him until he encounters Jin and an incident that shows him the horrors of life. He is still a bit unclear of what justice and idolizes Jin for being so clear of his ideas of justice.

The two characters are quite the opposites, but when they interact the question of “What is Justice?” constantly pops up. As the characters struggle to find what they believe is justice, we also find ourselves wondering with them.

Zetman’s entertainment doesn’t all just come from themes and characters though. The action is quite nerve breaking. The romance subplot is also quite strong and enjoyable. It is interesting to read about the tension between their lives as people and their lives as superheroes. They try to understand what being a superhero means but also have to cope and protect with the ones they love. Of coures, the originality of this isn't there, but its still fun.

Oh. And The Art Is Amazing.
It’s quite an amazing feeling seeing all the details put into it. The characters, the background and the action scenes are all just drawn so well.

Sadly, the pacing of the manga is rather very hard to follow as the beginning explains very little about the setting. The direction of the plot for a while is almost impossible to follow especially "the Kouga arc". I admit I’ve actually dropped this manga a few times. Still, if you keep with it, and when everything connects, simple enjoyment will overwhelm you.

This series started out really good, I would have rated the first part 4 stars or more. After a while though it made a huge shift in plot & characters, and seemed like a completely unrelated series. That part sucked major balls, and should be given a negative rating.

If I had the capacity to give the series 2 seperate ratings, I would give the first part very high ones (probably 8/10), but the later part deserves very low ones for story & overall (probably 0.0003/10). The scores included here are the 2 sets averaged together.