Zennou no Noa: The World of Lostmemories 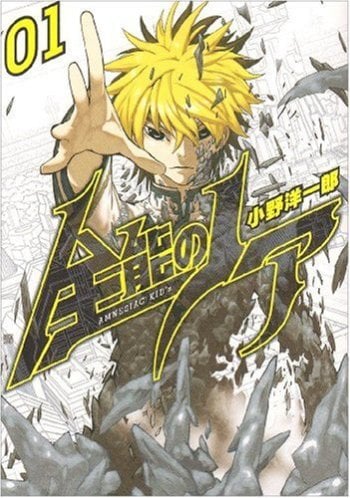 In the year 2038, a white light descended on the center of Tokyo and stole the memories of over one million people. The cause of this horrible incident was not determined, and no cure was to be found. The government formed a separate city beneath Tokyo to house and care for the victims of the incident and branded them as "KIDz." Regardless of their age, they truly are like children, and they must be retaught everything they once knew. Noa Ikurumi, who lives in this isolated society, is just taking one day at a time and dreaming of finally being allowed to go back out into the world. But Noa's life will once again change drastically on the day that he is taken hostage by a terrorist with some surprising information about his identity...

What starts out as an ordinary day in Japan turns into a complete contastrophe when, all of a sudden, the sky fills up with a blinding light that wipes away the memory of all those who see it. Over one million people are affected – children, teenagers, adults, evern the eldery are missing memories of their life (yet somehow still can speak Japanese). In response to this, the Japanese government starts shoving all the “Kidz” (the term used to describe the people who lost their memories, given to them to reflect their child-like thinking) into an underground society, under the assumption that they were dangerous to the normal populace. Now, two years after the incident, Kidz are treated like some sort of scum by the “Adults” and must live with the prejudice that comes with it. This situation can only last so long until someone is fed up with the Adults and aims to free the Kidz. This is the concept I got from first reading up on Zennou no Noa. Quite frankly, the concept thrilled me. Possible rebellion? Possible civil war? A lower social class trying to overthrow those above them? All the makings of a great classic from that premise! What I got, however, was something different than I expected. Zennou no Noa is an thrill ride filled with intricate plans, massive amounts of action, explosions and plenty of comedy (though, I think the comedy was not actually intended). The first thing you're presented with in this manga, as with just about every manga, is the art. I couldn't help but feel that the art is top notch and completely respectable. Maybe nothing too original or one-of-a-kind out of it, but it's still done perfectly. However, the same can't really be said about the characters. Too be honest, the characters seem like they were just copy pasted out of other series. The main character, Noa Ikurumi, seems like exactly like Light Yagami from Death Note. In almost every fashion, too. There's just about no difference in their personality, and even their appearance has major similarities. You can also find the same character of Tokiwa Shunsuke, the police-based opposition, in just about any series. The honorable person who sticks to the law as closely as possible and once the law fails he lets his own morals take over. Perfect at everything he does, from sword work to critical thinking, he tries his best to bring down his good intentioned terrorist opponet. Great art, but fairly poor characters. Despite the complaints of the characters, they all still flowed and complimented each other well with the plot. -----THE FOLLOWING PARAGRAPH HAS PLOT SPOLIERS----- Going back to the initial concept, I was expecting a civil war of sorts. But, instead, I was given a terrorist bombing. I was then thinking “alright, a terrorist group aiming to bring down the opressive government,” but that was wrong also. In the end, the entire rebellion is commenced by one guy. Just ONE guy. I'm all for the idea that one guy can change the world, but to have him aim for freedom of an entire people, that quite frankly didn't seem they wanted freedom, alone seems sort of ridiculous. However, he does inquire help from friends in order for him to complete his final mission. He, also, finally convinces all the Kidz to rebel and fight the Adultz once the Adultz finally show their true colors and start to kill them all. A problem with this I have is that you'ren ot shown much of the corruption. All they show you is a lecherous teacher and a man being beaten for wainting to leave the city. I really wish they would have shown more examples of actual opression. They eventually present the fact that the military was going to kill off Kidz and morph some of them into monsters, but this only comes out in the last volume, so it seems kind of late to show. Also, all the Kidz seem a-ok in life without their old memories, in a life below the surface, they don't show anyone feeling annoyed about their lives underground other than Noa. Despite these issues, I found the plot to be quite entertaining and well done. The introduction of Noa's love, Kisaragi Himiko, from before he lost his memories was well done. Her existence gives a small bit of background information on Noa's old self (the fact the he developed the weapon that caused everyone to lose their memories), which creates a mental unrest for Noa. Not to mention that it shows the awkward atmosphere when Noa clearly doesn't remember, nor holds feelings for his old lover. The final showdown between Noa and the final political bad guy is completely well done. A great fight scene from a manga I feel. And, the tragic conclusion of the series gives a huge gloomy atmosphere as Noa realizes his mistakes. Too conclude, this series was simply incredible. Wonderful art and an interesting plot to follow. I'd recommend Zennou no Noa to anyone with time to waste.