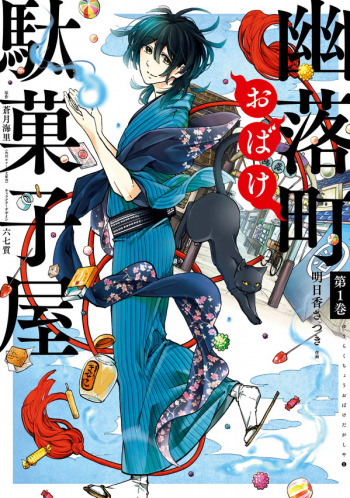 The story follows Iwakura Kazumi, a man currently down on his luck after his company goes down. While trying to rebuild his business and in need of a place to stay, he takes up the caretaker position at the Maneki Neko Jinja, a small shrine built by his great-grandmother in honor of cats. But he soon finds out that he has to share the space with someone–or something; three bakeneko who have been living there for a long time, and who seem to know his great-grandmother. Now he has to learn how to deal not only with the three cats, but also with the people who come and go to the shrine.

A world where youkai and humans live side-by-side in a mountain town.

Mamiya Chihiro, a poor student afflicted with the ability to see ghosts, is stalked by a Youkai who wants to hire him to work at his restaurant.

In the spiritual land of Kunisaki, Highschool freshman Nonoka Kibe runs a consultation office for the supernatural. As the only one who can see them, her goal is to aid in any way she can, along with her oni friend, Chibiki, and her Yamaha TownMate.

When his new high school's dormitory burns down, Yushi Inaba is left scrambling to find housing that a sixteen year-old orphan can afford. The only place he finds is an old apartment building called Kotobuki-so, where the rent is cheap and the building is... haunted?! A ghostly boy wanders the halls with his dog. The cook is completely invisible except for her hands. And the landlord is a giant youkai, who doesn't like it when the rent is late! The unfazed human residents live right alongside their unearthly neighbors; and now that Yushi has joined their community, his life is about to get much stranger!