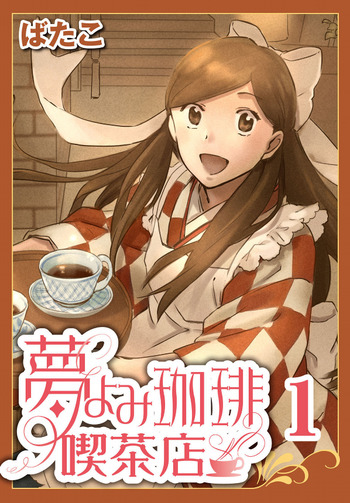 Our story takes place in Japanese Style Tea House "Rokuhoudou" which is quite popular due to the great efforts of Sui (shop manager in charge of tea), Gre (in charge of Latte Art), Tsubaki (in charge of desserts) and Tokitaka (in charge of the food). Not only do the excel in hospitality for their customers, but they also help out with their worries from time to time. A series of endearing stories that take place in this heartful restaurant. Who will be their customers today?

Yuri Is My Job!

Hime is a picture-perfect high school princess--she's admired by all and never trips up! So when she accidentally injures a café manager named Mai, she's willing to cover some shifts to keep her facade intact. To Hime's surprise, the café is themed after a private school where the all-female staff always puts on their best act for their loyal customers. However, under the guidance of the most graceful girl there, Hime can't help but blush and blunder! Beneath all the frills and laughter, Hime feels tension brewing as she finds out more about her new job and her budding feelings...

The girls are aiming to spend Golden Week at a hot spring. To earn enough money for the trip, they go to work for Wakaba’s sister!

The Precure members go to France as part of a cooking competition. While in France, Ciel is suddenly unable to change into her Precure form, and her sweets making is going badly as well. During the competition, suddenly the streets of Paris turn to sweets.

Youko, the daughter of the Rainy Color cafe's owner Kouji Amami, takes over as the acting manager of the cafe.

Aoi Tokura is having a rough day. He’s used to being mistaken for a girl, but it’s even worse when a captivating stranger on the train calls him a creeper for staring a little too long. Aoi’s soaked by a sudden rainstorm and takes shelter at Rainy Color, a cozy café where the warmth of the staff compliments the sweet hot cocoa he’s served. When he falls into a job at the café he feels like things are finally looking up— until Keiichi Iwase, the man he couldn’t help but stare at on the train, shows up. Did this day just get worse, or better?