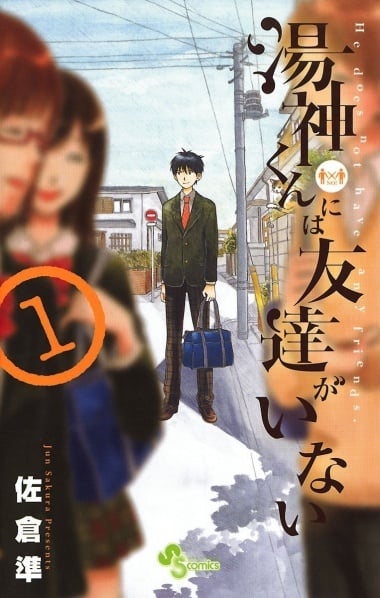 I'll say this out straight : This manga is an underrated masterpiece within its own genre.
Do you like well written characters? And do you dislike clishés? If you answered yes, you are definitely missing out on this story.

What really makes this manga so great are the characters, character interactions and the way of how different storylines intertwine. And the most awesome of it all - the main protagonist Yugami Yuujii. Heck, I really like this guy. It's so nice to have a reassurance that it's okay to do things your own way whatever everyone else says. Therefore I am so glad I found this manga in my life.

"It's fine since I have myself with me. I am my own ally." - Yugami Yuuji

STORY (10) - While the manga at first leaves an impression of being a high school comedy story about a loner guy and one confused girl who ends up sitting next to him, underneath it has a lot of aspects to it that can be contemplated about.

The main idea is about being accepted by other people. Having "friends" so to speak. Perhaps that is most of our goal in life as well? At least this is the main goal of the heroine Chihiro when she goes to the new school. I think she relates to us as readers the most (at least in my case).
One can think that to be liked by someone means following someone else's orders or doing things according to someone else's "tastes". And all in the reason to be liked. But is this all really necessary?
We have the main protagonist Yugami, who refuses all of this "bootlicking". Be your own self. Do things your way. If you do things the same way as everyone else just to be liked by them... aren't you forgetting yourself in the process? Viewing Yugami as a character and the way he acts makes you ask the question "WHY?" Why is somebody sucking up to someone else?
If I am my own ally, I don't need any of this stuff. Therefore, I don't need friends. Right? Right?

Hmm.. No. Because life is more complicated than that! But he makes these decisions himself and that's what's important. And that can be inspirational.
However, as readers we can see that even Yugami's approach is not always the best approach. Sometimes he makes things better, sometimes he makes things worse. I think that's natural. It's how life is.
And this is why I really like the mangaka who has written this. She has written very relatable life like characters.

CHARACTERS(10++ = 11) - As readers we see very different sides and thoughts of different characters. Yugami, who refuses to have friends and therefore depends only on himself. Chihiro, who understands others and wants to be liked by others. Kadota, who wants everyone to get along. XX, who was a lone wolf but realised she needs friends. Manager (and some other classmates), who shows us that people like Yugami can be bothersome, etc.

We don't get a clear answer. I think that's up to the reader to decide how to approach people in their lives. Instead, we get many different interactions, the story progresses, we get to know characters better. There is a lot of character growth as well, especially for Chihiro, who at first doesn't understand Yugami at all, and later on basically becomes main translator for the people who want to understand Yugami. And at one point she starts to inspire Yugami as well. And that is really nice development.

Many things happen. And after all, it's a comedy manga as well. We fall in love with the story and characters. We get this daily dose of happiness and amazing plot/interactions. I am not going to retell the story - read that up yourself! As you read this manga, there are a lot of life lessons to be acquired. From small to some bigger lessons. That's why my ENJOYMENT for this series is a 10.

The ART(9) improves over the chapters greatly. At the beginning chapters the art looks simpler and by the middle of the series you can notice a lot more detail to the characters. They grow with the story.

So of course, OVERALL (10). It's an amazing series that definitely should have a bigger following. A masterpiece SoL manga with loads of fun moments, great cast and life lessons. Perfect for me. And perhaps you will really like it, too.

I've read this manga multiple times now.  What I enjoy most is the characters.  This manga is what's called a character driven story.  This means there is no real plot just scenarios that the characters are placed in.  The protagonist really carrys the story.  I wasn't as big of a loner as he was in highschool, but I was still able to connect with his character.  He provides a new way to look at human interaction and being responsible for ones self.

I do wish the ending was more fleshed out.  It just leaves an impression for what happens, but that is my only complaint.  The art isn't anything to scream about.  Like I said earlier, it is the characters that drive the story and make it into a truly fantastic manga.

One of the best manga's I've ever read. The story was like no other manga's I've ever read and the character developments were great. I like the vague ending which gives the reader some imagination. The art was great and I could see it's improvements along the way. The characters are golden! I wonder how the author was able to come up with these characters?! Definitely a must read and will not disappoint you. It's not cliché, it's very comical, and you can learn new things as you read along. I admire Yugami's pov :)